When I was thinking about why I love Glastonbury Tor, the words ‘spiritually uplifting’ popped into my head. I immediately grimaced and felt a bit embarrassed which was ridiculous as a) I was on my own and b) I had said it in my head anyway.

There’s no getting away from the gentrified hippy in me though – there is something about standing right at the top of a hill, the wind buffeting you from all directions, fields laid out around you in a sea of patchwork green, that really is spiritually uplifting. 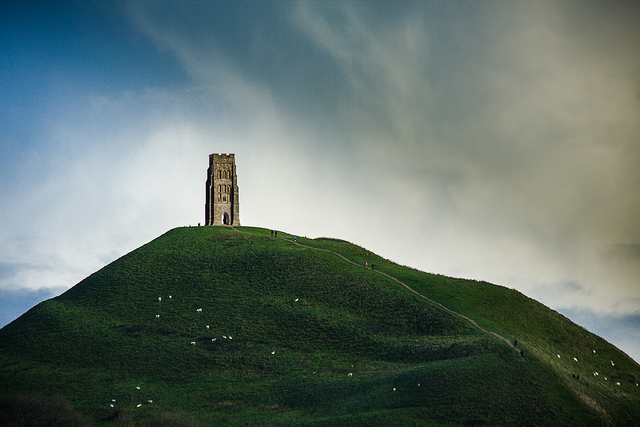 Glastonbury Tor has held a special place in my heart for a long time, which is why I submitted Glastonbury Tor as one of my favourite places on the LOOK hidden gems map (see  here). We moved to nearby Bridgwater when I was just ten years old and it became a regular haunt at weekends when we were a bit bored and fancied an outing. I loved it as a child as my mum apparently once accidentally rolled down it, and that was always funny to think about

As I grew up it became a bit of a go-to place for a third or fourth date, when I was trying to casually show that I had a secret spiritually uplifting side and also that I wasn’t afraid of climbing the odd hill. It can be tricky to act cool when you are out of breath, but if you need to stop on the way pretend that it’s because you just have to stop and admire the view, not because you are too puffed to speak.

In the summer of 1999 I took my then boyfriend Will and a four year old Bee to Glastonbury Tor to watch the solar eclipse, surrounded by pagan types banging colourful drums and chanting and I’ve spent the night at the top in a sleeping bag, dozing to the sound of an old man with a large beard badly playing the recorder.

I’ve yet to roll down it though. I think I might leave that to my mum.

What are your favourite places hidden around the UK?

Photo credit – Digitalexpress
Disclosure – this post is in partnership with LOOK.