How is your post-Christmas diet shaping up? January is supposed to be a time for fresh starts – healthy eating, wholesome walks in the countryside, that sort of thing. Not so for me. We get given so many food related Christmas gifts that the first half of January at least is awash with sugar in a veritable sea of fudge, fruit liqueurs and violet creams.

Thursday was a particularly shameful day for me as I was entirely alone and so had no one to look at me, eyebrows raised, as I reached for the seventh biscotti.

Here’s roughly what I ate (in chronological order):

I ate the satsumas just before bed in an act of desperation, hoping they might undo everything that had come before them.

I thought about typing it all into some sort of calorie counting programme, just out of curiosity, but predict the screen would just flash red with a warning – ‘You are about to have a heart attack! Seek help immediately!’

Excellent timing then that I have just been sent the Smart Swaps pack from Change4Life. Anyone can sign up for a free pack, and you’ll be sent money off vouchers, fridge magnets and a Smart Swaps wheely thing, giving you ideas for simple swaps you can make to your diet. In my case the advice should probably be ‘swap everything you would normally eat for anything else at all, seriously, come on now’. 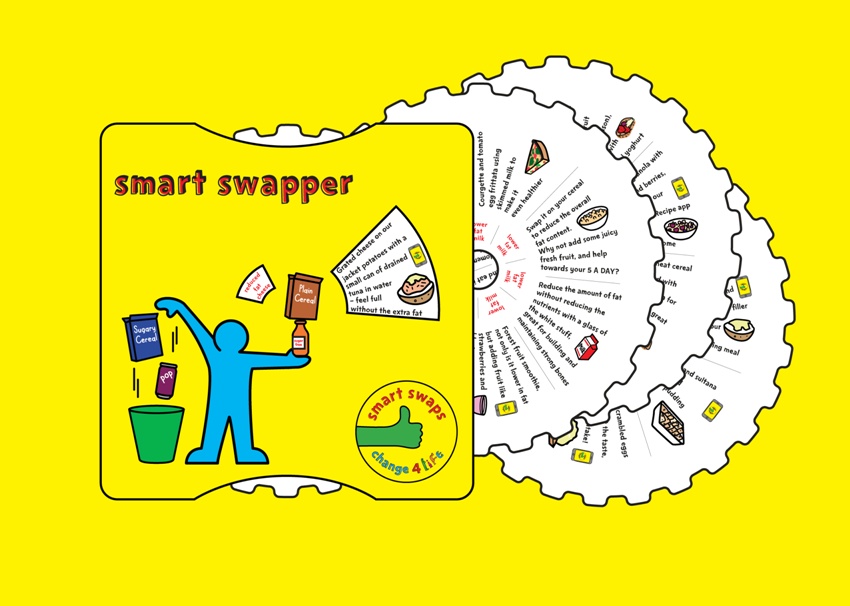 That’s not quite the spirit of the campaign though. The idea behind Smart Swaps is that you can actually make a big difference to your health by just taking small steps to swap a few simple things – it doesn’t have to be expensive of complicated. There is even an app to help you come up with recipe ideas, plan your shopping and generally inspire you.

It’s all completely free, so if your Christmas has been anything like mine – please tell me it was – then it’s definitely worth a try. (After all, who could failed to be inspired by a bit of old school sausage?) So, put down the fudge, step away from the gin, and sign up for your free pack now.

Disclosure – this is a sponsored post. I wish that meant that it was all fabricated, but unfortunately everything is true. I really did eat that squishy coffee table brie.