Have you ever been to a production of Twelfth Night where you have been invited on stage for a shot of tequila?

Come to think of it, have you ever been to a production of anything where that has happened?

Neither had I until last Thursday.

I was invited along to Bristol’s Tobacco Factory to check out their new comfy seating and watch the Filter Theatre Company’s production of Twelfth Night, and was jolly glad I said yes – not only did I get a tequila, but half way through, as some sort of quirky-theatre-company-interpretation-of-Shakespeare thing, they had pizza delivered for the audience. Very avant-garde.

(Be warned, this is the level of my theatrical review skills.)

The new seating is the result of a six month public appeal and was installed to “increase audience capacity, to improve customer comfort and to improve sightlines in the theatre auditorium, whilst retaining the character and flexibility for which the space is known.”

Well, I can safely say it did all those things very nicely. Now I’m a grown-up, being comfy is very important to me and the new seats are ace, with – at the risk of sounded about 67 – excellent lumber support. We sat in the very front row, which is quite low to the ground. It’s a bit like sitting in a sports car, except that if you want to you can stretch out your legs and there’s room for your handbag. 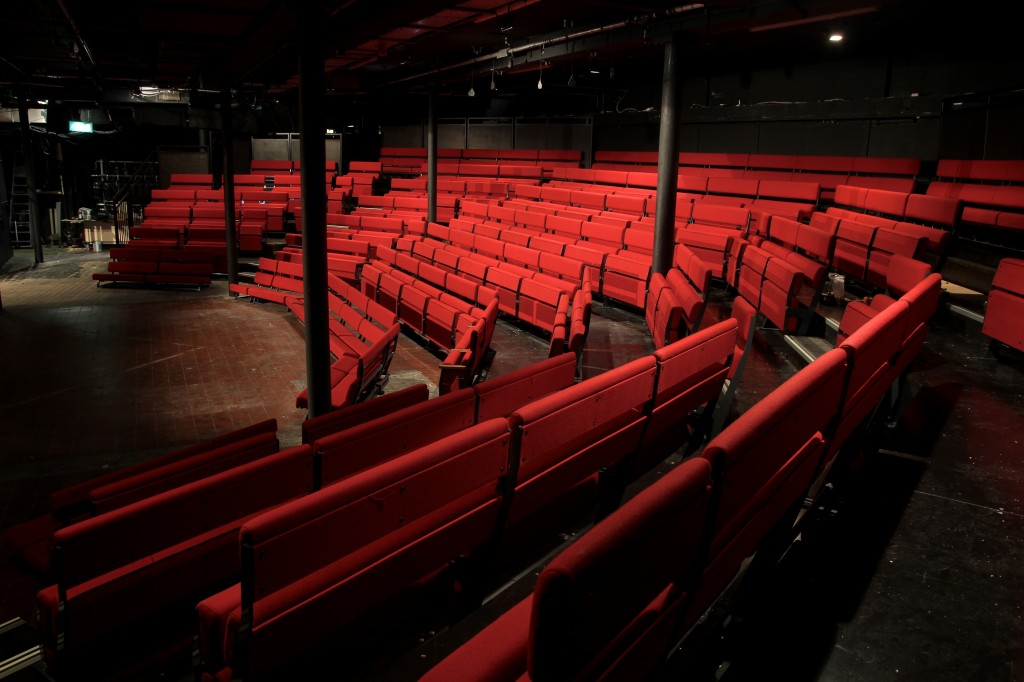 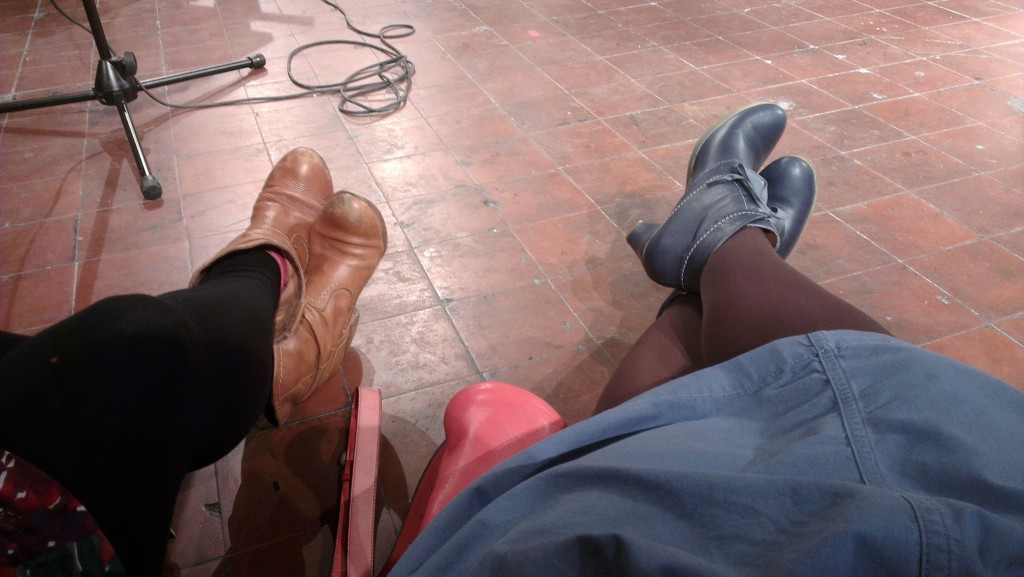 Here I am doing my best thoughtful pose, as though I am contemplating the beauty and artistry of the production and not the snacks waiting for us in the bar. 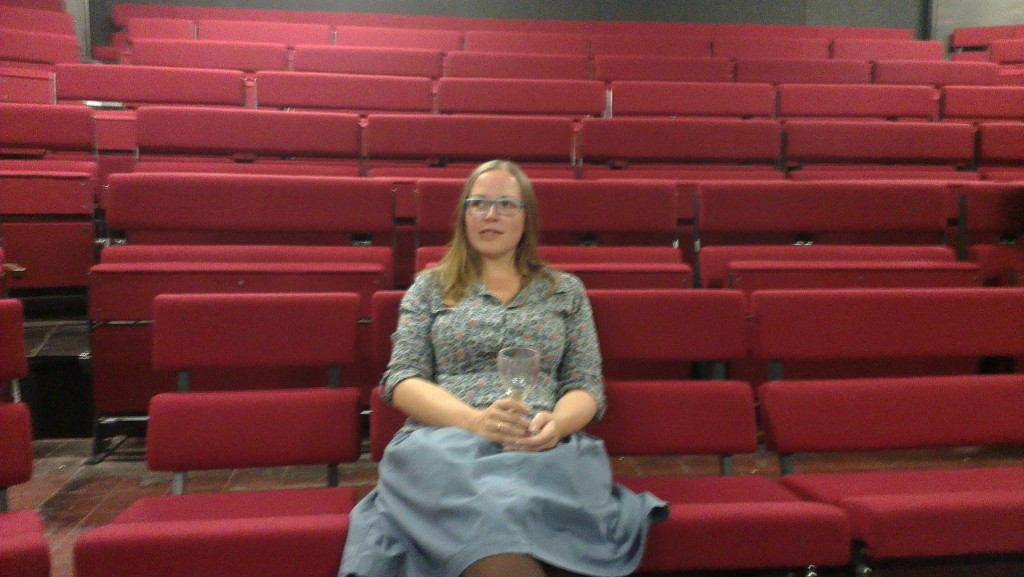 I really liked being right at the front.

Whenever I go to the theatre or to see live music I like to be as close as possible to what people are actually doing – I want to be able to see sweat forming on a brow and fingers making chords on the neck of a guitar. Sometimes I like to catch the eye of the actors and musicians and imagine them getting caught up in the passion of the performance and falling in love with me from the stage.* If I get tequila and pizza that’s a bonus too. For me it’s all part of the live experience, the two way communication that sets it apart from just watching a film of listening to an album at home, and the design of The Tobacco Factory is absolutely perfect for this.

Sat in the front row, we were basically part of the performance, as the ‘stage’ is really just the area right there in front of you. Filter Theatre Company took a modern take on the play, which seemed at first glance to primarily involve a lot of cables. You definitely felt that you were  part of the show and not just detached spectators. 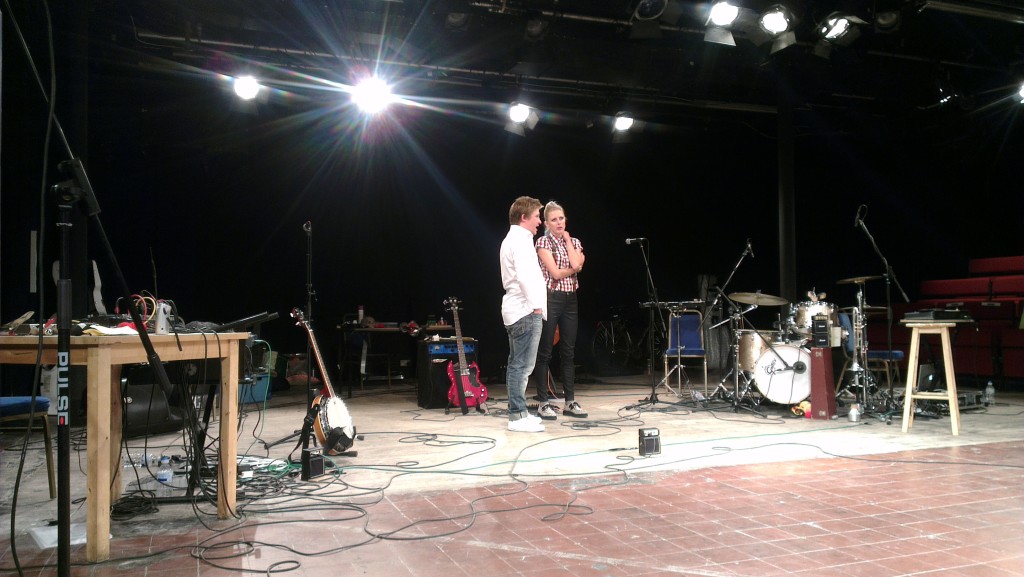 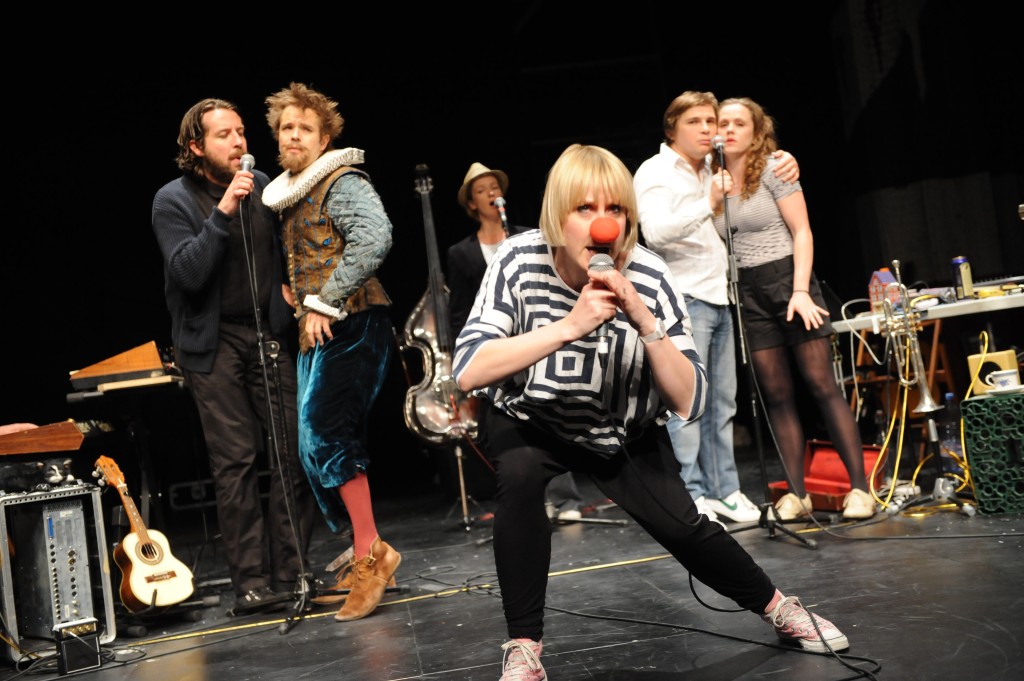 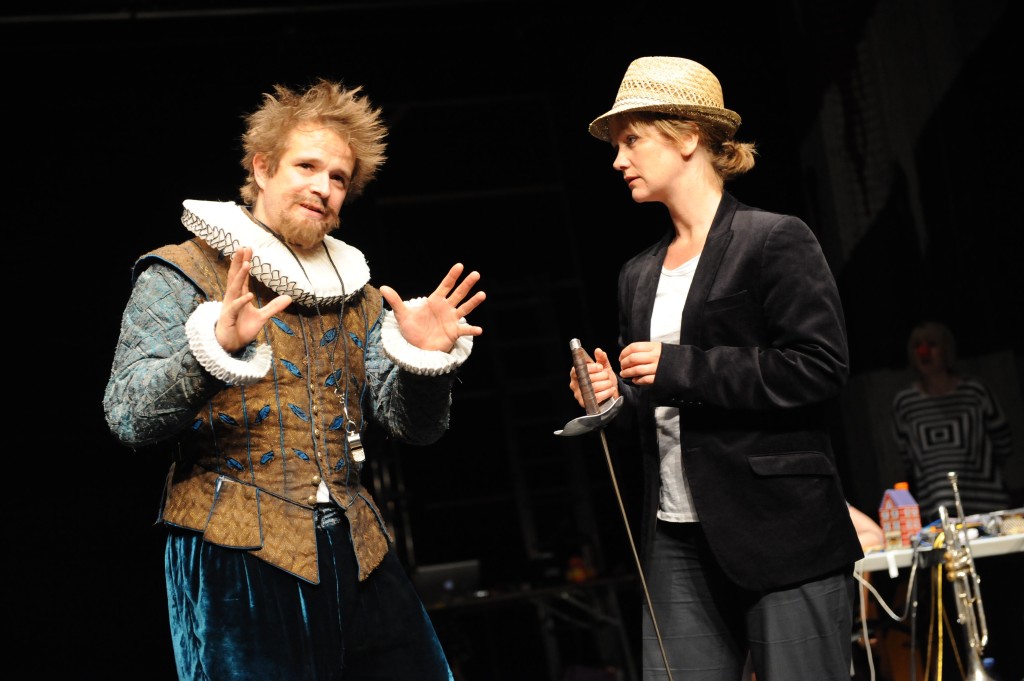 It was a very lively and fast-paced performance, with lots of raucous behaviour and laugh-out-loud moments, as there should be in Shakespeare. It was a small cast, so several members were playing more than one character. I did wonder if this might make it a little confusing if you hadn’t already seen the play, especially at the end where one person is playing both Viola and Sebastian and there appears to be some sort of Shakespearian threesome going on with them, Olivia and the Duke. I know the story of Twelfth Night, and have seen a couple of other productions of it, and even I found it a little difficult to keep up with in places.

The acting though was excellent and I was particularly fond of Malvolio, although who isn’t? This Malvolio was superb though, stripping down dramatically at one point to a pair of gold shorts and yellow socks, so caught up was he in the idea of becoming rich and important – something we’ve surely all done at some point in the privacy of our own home.

I would definitely recommend a visit to The Tobacco Factory soon – even if you don’t enjoy the production (which I’m sure you would) at least you’ll be comfortable. You made need to take your own tequila though.

*I nearly took this bit out for fear of sounding like a complete madwoman but surely I’m not the only person who has ever done this? If you’ve not done it then you’ve clearly never seen Seth Lakeman live.