Did you know that one in five girls in the developing world is married before the age of 18? That means that there are 14 million under-aged girls who are marrying every year – around one every two seconds. 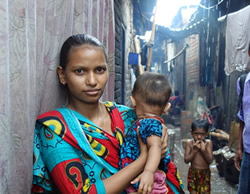 A 13 or 14-year-old girl should be laughing with her friends and furthering her education, not being forced into relationships with older men. Can you imagine having a teenage daughter and marrying them off to be pressured into sex, impregnated and then expected to deliver a child at a young age? Forced to give up their education, they are expected to be devoted wives for their older husbands – stuck in a life that they never chose and forced to watch their daughters grow up to the same fate.

These marriages rob these girls of their innocence, often before they have even reached puberty. They are also at the root of many other problems in society, including disease, poverty, maternal mortality, violence against women and infant mortality. If we can solve the child marriage problem, it will have a positive effect on all of these other issues as well.

Why Does This Happen?

The issue of child marriage is very complicated. The traditions behind it have existed for many hundreds of years and these marriages are usually arranged by family members. The marriages are linked essentially to the belief  that women are less valuable in society than men or that young girls do not need an education.

Poverty plays a big role too. Girls who live in poor households are much more likely to marry before the age of 18. When these young girls get married, they are no longer an economic burden to their family. They are valued as capital, their worth assessed in terms of cash, goods or livestock.

There are also a lot of deep seated cultural issues relating to the control of a young woman’s sexuality, which is traditionally linked to family honour and status. These traditions are often related to religious beliefs and practices.

If we can stop child marriages, we can help these communities for the better in so many ways and change the lives of young girls forever.

Contact Plan UK at www.plan-uk.org and find out more about how you can help.