“I’ve been reading this great blog lately,” a friend was telling me the other day. “This woman clearly hates being a parent and is always going on about how she hides cans of gin and tonic in the toilet so she can get ten minutes peace. It’s hilarious!”

Well yes, I’m sure it is, but exactly how hilarious is it going to be when that woman’s children get older and read what she has written about them?

How might you feel for instance if you found out your mum had been posting pictures like this? 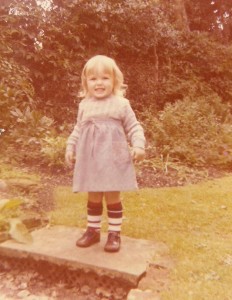 What do you think?

Are you a blogger? Do your kids read your blog and if so does that effect what you write?

My blog has changed a lot over the last three years, not least because Belle has gone from being an innocent seven year old to the ten year old proud owner of a second-hand laptop of her very own. Where initially I might have been more inclined to have a moan about the stresses and strains of parenting, nowadays I am much more wary of what I say and how I say it. That’s not to say I used to be mean  – I’ve always strived for that elusive mix of gentleness, humour and honesty (although some might say brutal honesty at times) – but I’ve certainly become more aware of the power of my words.

When your children are very small, babies maybe, it’s hard to imagine them ever being able to talk, let alone read. It’s easy when you’re writing to forget that they are ‘real’ in the sense that they exist outside your blog too, and will grow up to have their own thoughts and feelings about and interpretations of any given situation.

Sometimes I find that knowing that my children read my blogs restricts me in other ways too. Some days I might feel sad or angry about something, and want to blurt out how bad I feel, but even though it might not be directly about them, is that really what I want them to be reading? I know it’s good for your kids to know that you’re human, but do they really need to see you laid so bare?

In a way though this is a good thing. I do have a tendency sometimes to speak (or in this case write) before I think, and so taking that moment to think ‘would I want my children to read this?’ is a great natural filter for me. In most cases, if it’s not something you want your own family to read it’s probably not something you need to share with the whole of cyberspace.

I’ve also been thinking a lot lately about the values that are important to me, both as a parent and a blogger, but also more generally. I’ve come to the conclusion that I don’t want or need to be the funniest, the most controversial, or the most sensational blogger in the world. (I know – I only just decided this…)

I would just quite like to be nice, to be genuine – interesting to read yes – but more importantly, respected for being honest and sincere, and this I think is part of making my blog something I am proud to have my children read. Of course it would be good if you laughed out loud occassionally too. No pressure there.

I might of course have it all wrong – never blogging about how much I hate parenting or revealing the secrets my secret toilet gin supplies might make me incredibly dull, but that’s a risk I guess I’ll just have to take.