Now, I’m not one to judge, but in this case, I actually am a judge, so I think it’s OK.

I’ve been asked to be a judge in a competition being run by Jeego, where you have to submit funny things your kids say and the winner has their expression turned into an animated e-card. Now obviously they chose me because I am hilarious and so a good judge of what’s funny. Either that or I was the only person to say yes. Pretty sure it’s the first one though. 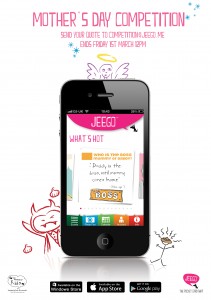 Kids of course say hilarious things all the time, (who can forget Belle’s photogothic memory), especially when they are little.

“I’m meeting that woman today,” I was telling Boyfriend the other day, “Clare something or other.”

You see? Born to be on the stage.

Anyhoo, if you’ve got small children and they say anything funny over the next week or so, you might want to enter the competition.