One of our Quality-time-family days-out over the summer holidays was to Wookey Hole – you may remember it being in the news a while ago when they advertised for a new witch. (What a job!)

We went with our friends Vicky and Ashley, and we really did have a lovely time. It’s one of those places that definitely makes the most of the space – it’s built around some caves and an old paper mill, and hats off to them for the amount of entertainment they have managed to cram in. In terms of ice-cream outlets per square foot, you certainly get value for money.

When you’ve had the tour of the caves, you come out into a slightly bizarre area dedicated to an unusual mix of fairies and dinosaurs. There is also a giant Kind Kong. It almost looks like they got loads of props in a job lot in an auction, couldn’t think what to do with them, so bunged them all together in one space.

That’s not the disturbing picture though…

In one corner of the dinosaur-fairy-King-Kong display they had a prehistoric family, where you could put in your head and pretend to be cavemen. It was kind of cute when Belle and Ashley did it.

Not so cute when Vicky and I did it. As soon as I put my head in, Bee practically wet herself laughing. “Oh My God! Mummy that looks just like you!” I like to think I am a little bit more shapely around the waist, but otherwise it does bear a worrying resemblance. It felt wrong. It was basically me standing naked in a loin cloth in the middle of a family amusement park: 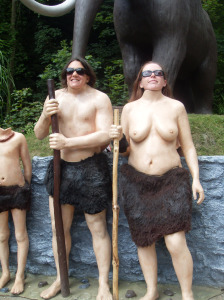