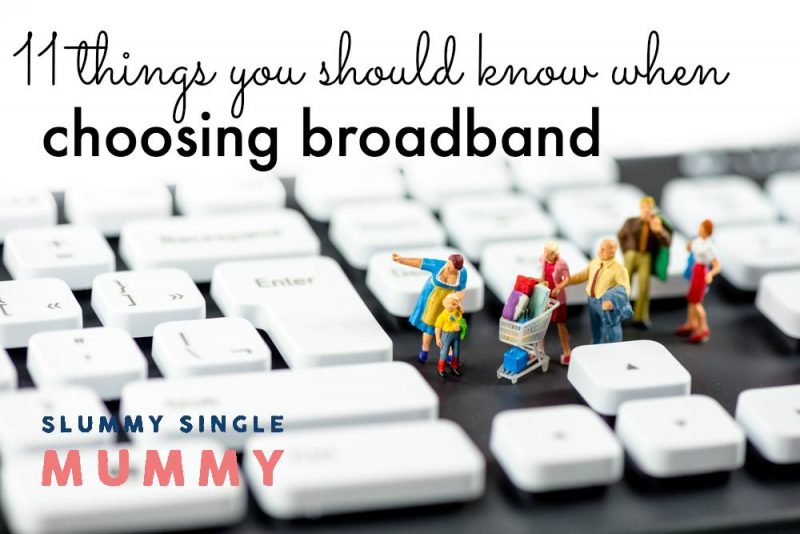 I’ve recently learnt a new skill. I’ve learnt how to cast things from my phone to the TV via AppleTV.

I was pretty pleased with myself because I’ve noticed in the last couple of years that something weird has started to happen to me. Perfectly simple things like remote controls have started to scare me. I’ve essentially lost the ability to switch on the television in someone else’s house. I see all the buttons, but I can’t figure out which one to press. I can see why older people end up staying with the insurance company for 40 years even though it costs twice as much – the prospect of having to figure out exactly what cover you need and what forms you have to fill in is sometimes just a bit much.

If this sounds like you then I’m here to help you. I’m focusing on broadband today, and if you find it useful then let me know and I can always write some other guides for things like utilities, insurance, how to make a sandwich etc. This post has been written in partnership with the wireless broadband provider called Relish, whose model I think is ace. That’s why I mention them a lot. Even if Relish isn’t in your area yet though, I’ve made the information useful regardless. I’m looking forward to them rolling out their service across London and then nationwide soon. You can also compare broadband deals at https://usave.co.uk/broadband/.

This post was actually really useful for me to write, as I’ve never been quite sure about what things like ‘download speed’ mean. Belle is always complaining about the broadband strength in her bedroom, and occasionally I bandy the words ‘signal booster’ around to try and appease her, but I don’t actually know what they mean. Luke from Caelum Communications says “setting up or changing your broadband shouldn’t be a long and tiresome process.”

If you’re worried that you’re paying too much for your broadband, or want a new provider but aren’t sure what to look for, then read on Macduff*…

What broadband speed do I need?

According to Ofcom, the average broadband speed for fixed line home broadband in the UK is currently 28.9Mbps, which is apparently ample for most people. What does that even mean though?! Well, essentially the higher the number, the faster your broadband. This means you can do things more quickly, so downloading a film won’t take as long. It depends then on what you use the internet for, as well as how many people are using it. If you’re got several children, all wanting to watch YouTube make-up tutorials at the same time, then you’re going to need much faster broadband than if it’s just you checking emails and playing on Twitter. (Me.)

What’s the difference between standard, wireless and fibre broadband?

This handy guide from Which? shows you roughly what to expect time wise from different broadband speeds: 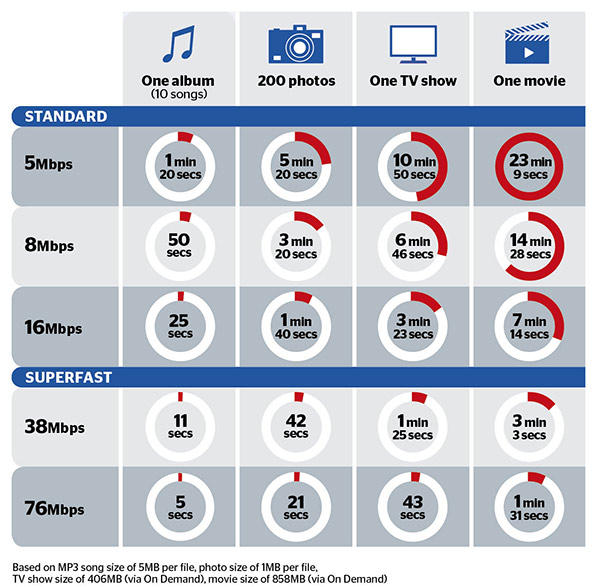 Will I get the top speeds listed?

It’s unlikely. Companies are allowed to advertise speeds that only 10% of their customers can get, which means that the majority of people won’t be able to get the speeds advertised. It might be worth doing some research online first, or perhaps talking to neighbours to see who they use and what speeds they get. We struggle in my office as the infrastructure in our town centre is really bad and we’re in an area that missed out on some kind of update or something. (I don’t really understand tbh.)

I did a quick test to show you what I mean: 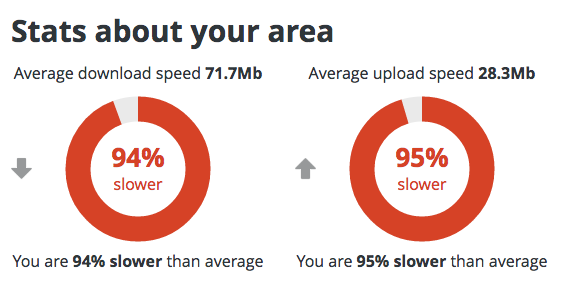 This is a wired connection too, not wireless. As you can imagine, looking at the Which? table, it takes me a long time to upload videos to YouTube.

How can I test my own broadband speed?

Just Google ‘broadband speed checker’. I used USwitch to do the test above.

Download speed is the speed at which stuff is pulled from the internet onto your device, like downloading a film or browsing the web. This one is normally higher as standard, as it’s what most people spend most time doing. Upload speed is the speed at which things are transferred from your device onto the internet, like uploading a video to YouTube or adding pictures to a blog post.

You may want to look out for a broadband provider that offers unlimited data so you can stream videos to your heart’s content, without the fear of hitting your monthly ‘data allowance’. Relish doesn’t cap your internet usage – with them unlimited really does mean unlimited.

How long will it take for you to get online?

One of my biggest fears about switching broadband providers is that I’ll end up offline for weeks. I’ve had house moves in the past where it has taken what felt like years to get connected. If you can’t live without the internet for long, then make sure you ask about connection times before you sign up.

One of Relish’s key selling points is that you can get online literally within hours of signing up. Order before midday in central London and you can be online by 5pm for a one off £20 delivery fee, or the next day for free. 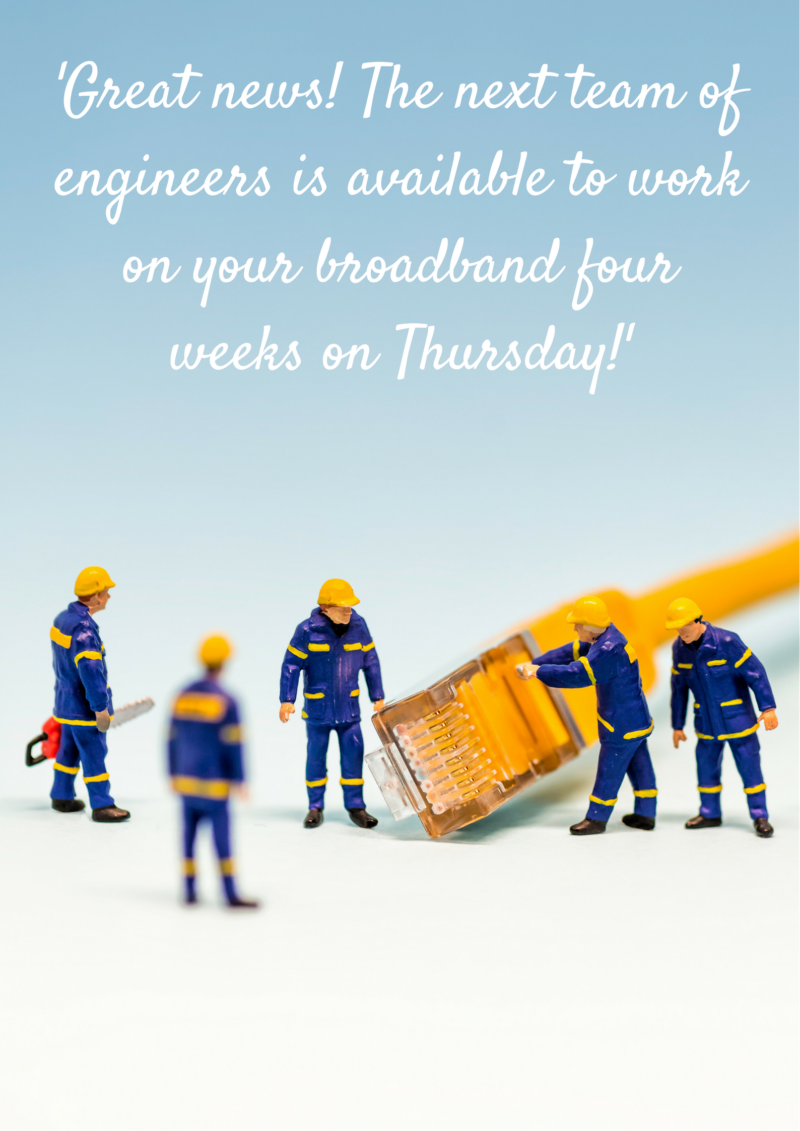 Will you need an engineer?

Most of the research I’ve done suggests that you won’t normally need an engineer to call at your house, although they may need to fiddle about in a box somewhere – ooer – or install a landline if it’s for wireless. I think this will be down to your personal circumstances so best to ask.

You definitely won’t need an engineer to set up Relish broadband. They just deliver your hub, you plug it in, and you’re good to go.

What’s available in your area?

As we touched on with the whole standard vs superfast issue, not all areas will have the same coverage and so not all providers will be able to offer to supply your broadband. It’s really easy to use a comparison site to check what’s available in your area.

Do you need a landline?

Yes. Or maybe no. Most standard broadband services require you to have a phone line to plug into, which is kind of annoying. Who uses a home phone anymore? We certainly don’t, but we need a landline for our broadband so end up paying out around £15 a month on top of broadband charges. Not cool.

Other services, like Relish broadband for example, (you knew I was going to say that didn’t you?), don’t require you to have a landline. They use wireless technology, so if you don’t use your home phone for calls you can get rid of it altogether and save a big chunk of money every month. 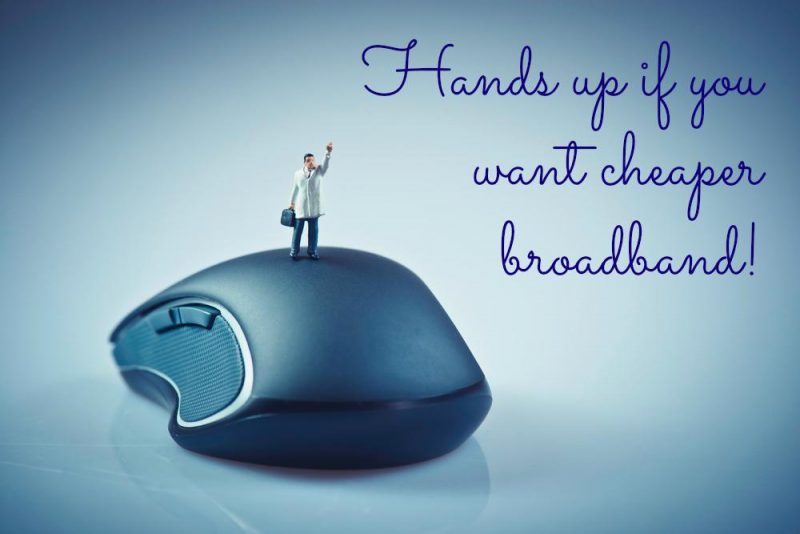 Are there any set up costs?

If you spot a cheap deal online it’s worth looking not just at the regular monthly costs, but at the set up costs too. Some providers don’t charge anything, but others do.

I had a quick search on a broadband comparison site and set up costs on the top ten results ranged from nothing to £59.99.

How long is the contract?

In my search of providers that I mentioned above, all of the top ten had a minimum contract term of 12 months and some were as long as 24 months. Now this might be okay if you’re happy not to have any flexibility or freedom, but it’s a rapidly changing market and you never know what developments might be around the corner. With Relish, you can do things a little differently. Their rolling contract – just one month at a time – means you’re not tied into anything you don’t want to be.

And that’s it! The wealth of all of my broadband knowledge right there. I hope you found it helpful.

*Actually a misquote of a misquote. A lot of people think Macbeth said ‘lead on Macduff’ but he actually said ‘lay on, Macduff’. Not as catchy.