Seriously, what’s not to love? With this post you can save some much needed cash and learn how to make an adorable chum. 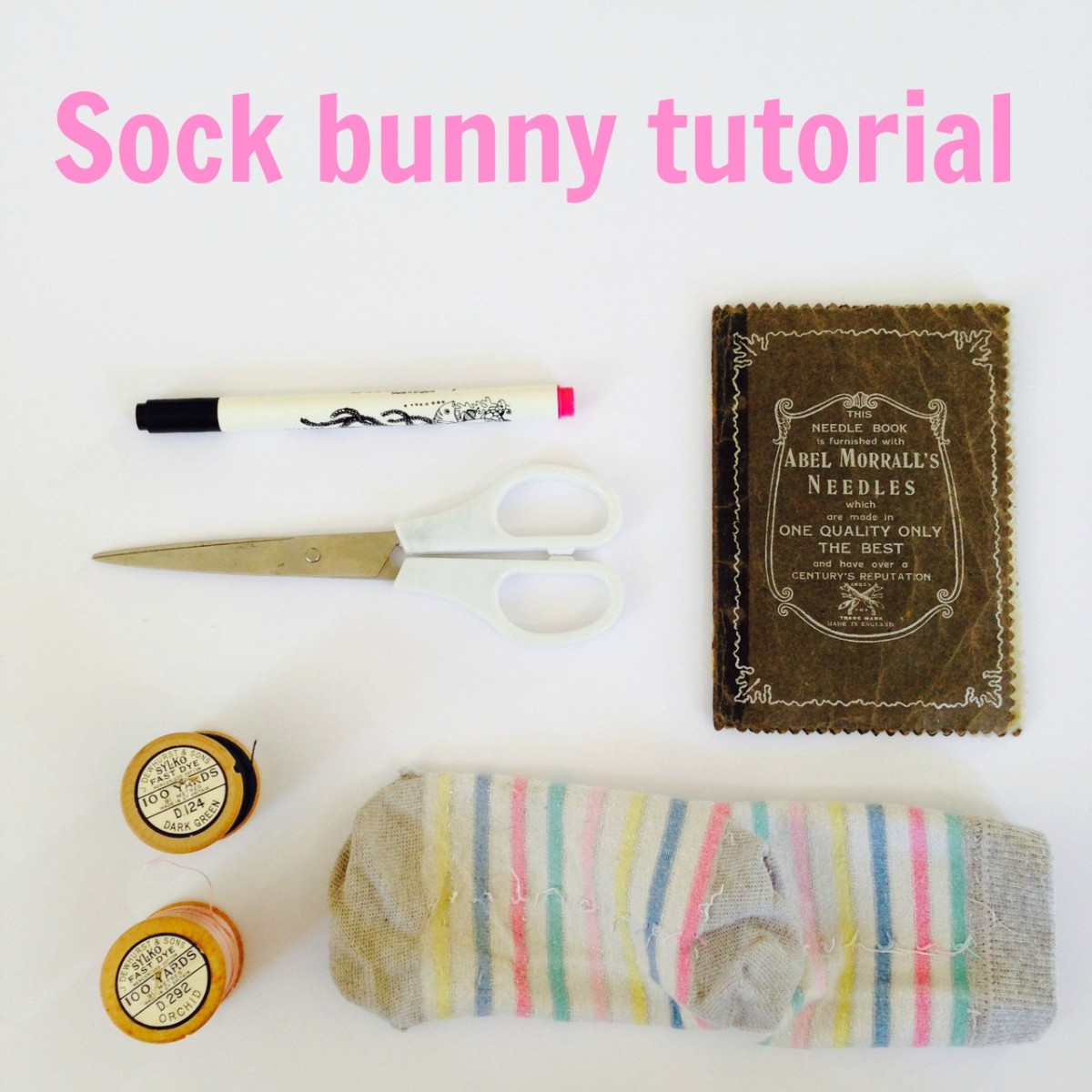 Boring stuff first though. (Or possibly not if, like me, you’re a bit of a finance geek and not much of a crafter.) I have to admit that in the past I’ve been a bit of a sucker for the price comparison websites where you get bombarded with meerkats, robots and other useless bits of tat in return for signing up to one of their deals – Belle has a whole windowsill of the damn things to prove it. Even in the big bric-a-brac clearout of 2015 she wouldn’t part with them.

What I hadn’t realised though was that they aren’t actually always the cheapest. Stupid of me perhaps, but there you go. When I was introduced to Cavendish Online then, I was very pleasantly surprised to see their life assurance quotes coming back cheaper than the meerkats could offer me – in fact Cavendish Online tell me that they always will. I also generally thought the Cavendish Online website looked nicer, and was easier to use.

Why not put their claims to the test and get a quote for yourself?

Here are my results from Cavendish Online: 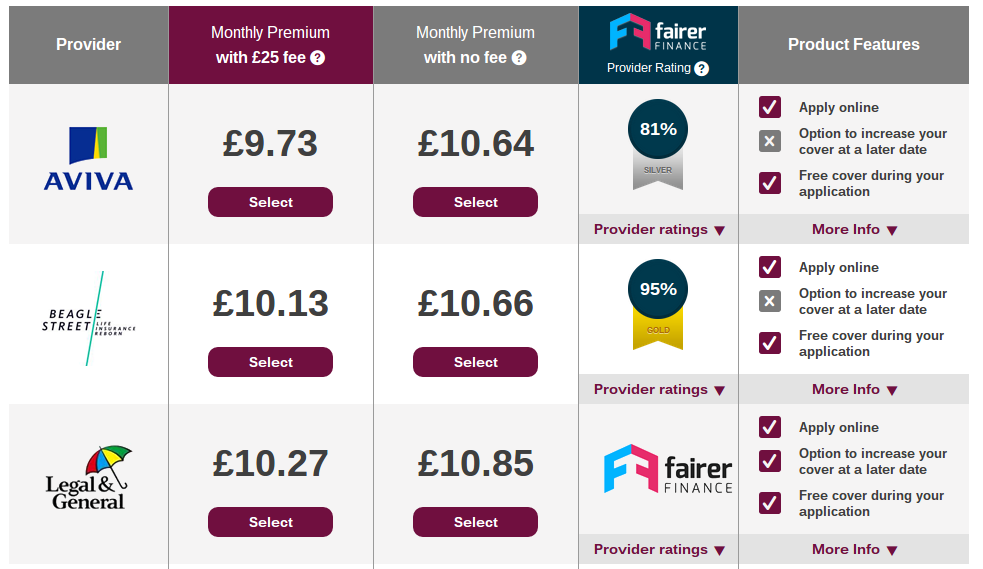 And from Compare the Market:

Cavendish Online aren’t some newly formed fly by night; they are recommended by Which? and are moneysavingexpert’s top pick for the past 10 years. They keep prices low by keeping costs low, which means no multi-million pound advertising campaign, no gimmicky mascots gathering dust on windowsills across the country, just low prices.

And this is where the sock bunny comes in.

Cavendish Online challenged me to use the money I saved to make my very own mascot instead – how much more fun would it be to buy cheaper life assurance and use the money you save to do something wholesome and fun with you family? (Or, in my case, during a quiet afternoon on your own, while watching Millionaire Matchmaker.)

Here’s how to make a sock bunny of your very own:

Firstly, gather together everything you’ll need:

Fold the sock flat, inside out, and draw on ear shapes, using the edges of the sock to make the outer edge of each ear. Stitch around the ears and then cut off the excess. It’s up to you how long you want the ears to be. 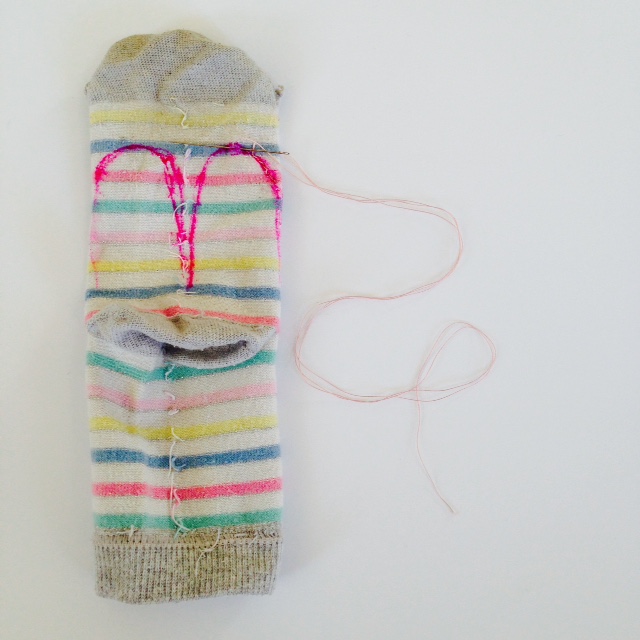 Turn the sock right side out again. Fill it with stuffing, being sure to push plenty down into the ears. It will take a lot more stuffing than you think, so keep on shoving it in until it looks about ready to burst. 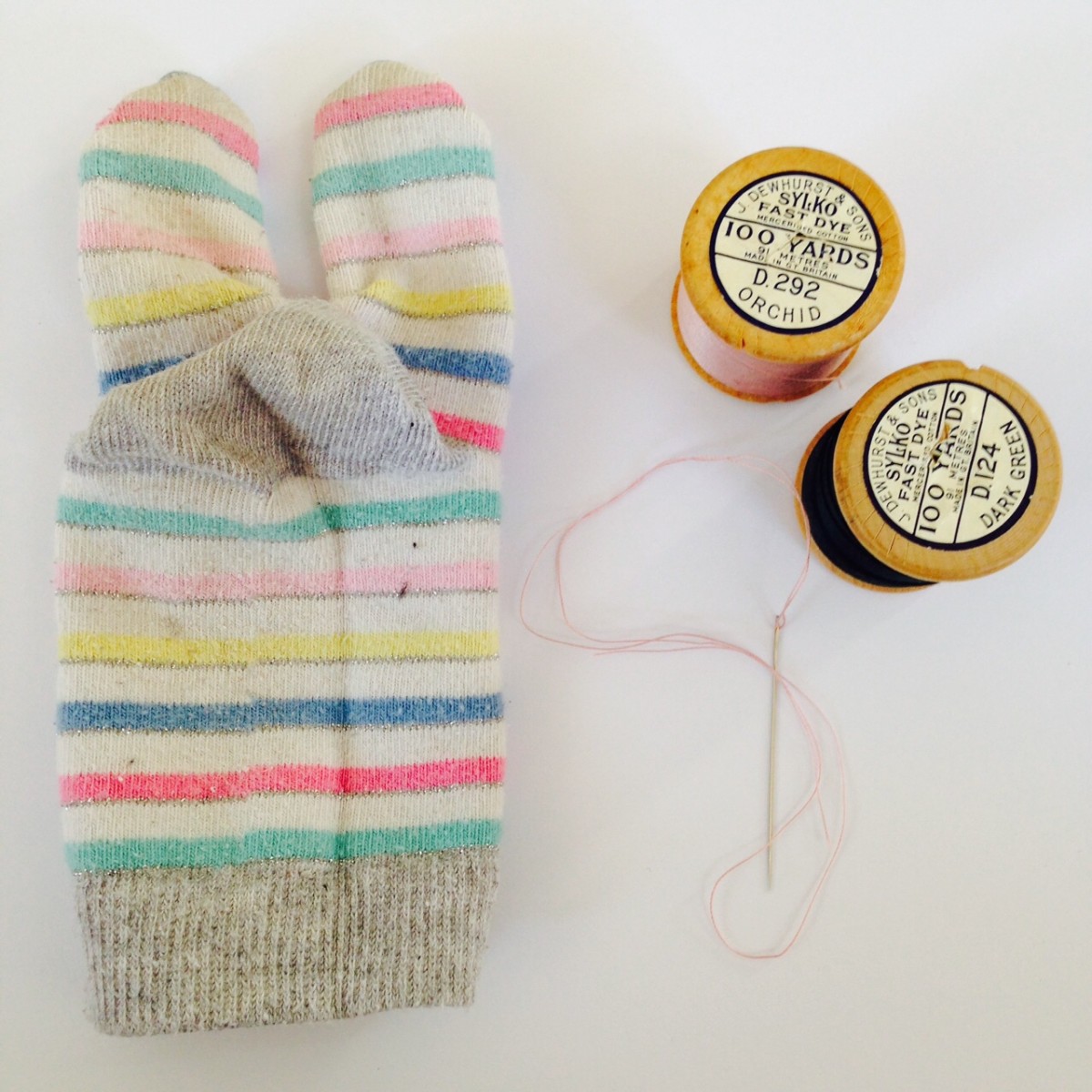 Now you have to stitch it up. The easiest way I found to do this was to do a simple stitch, gathering up the bottom of the sock. When you’ve gone round once, go round again, this time gathering up the bits that stick out from the first gathering. This sounds confusing but it feels pretty intuitive once you’re doing it, honestly. Finish off make making the end secure and then poking the needle right through the sock bunny and out the other wise. Cut off the excess cotton. 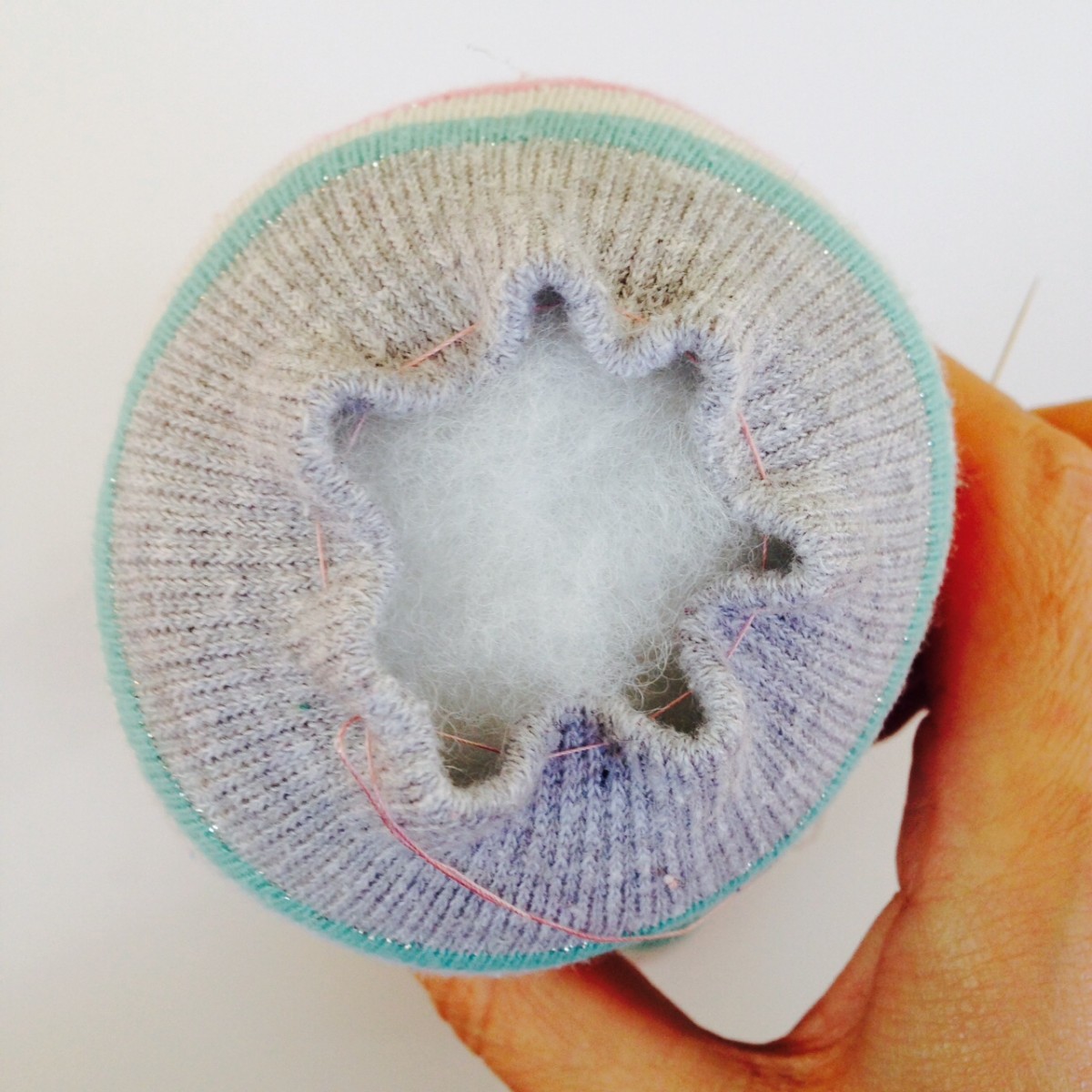 Make the ears look super cute simply by pulling them together at the base with a length of ribbon. Tie a firm double knot to keep it in place and then a bow. 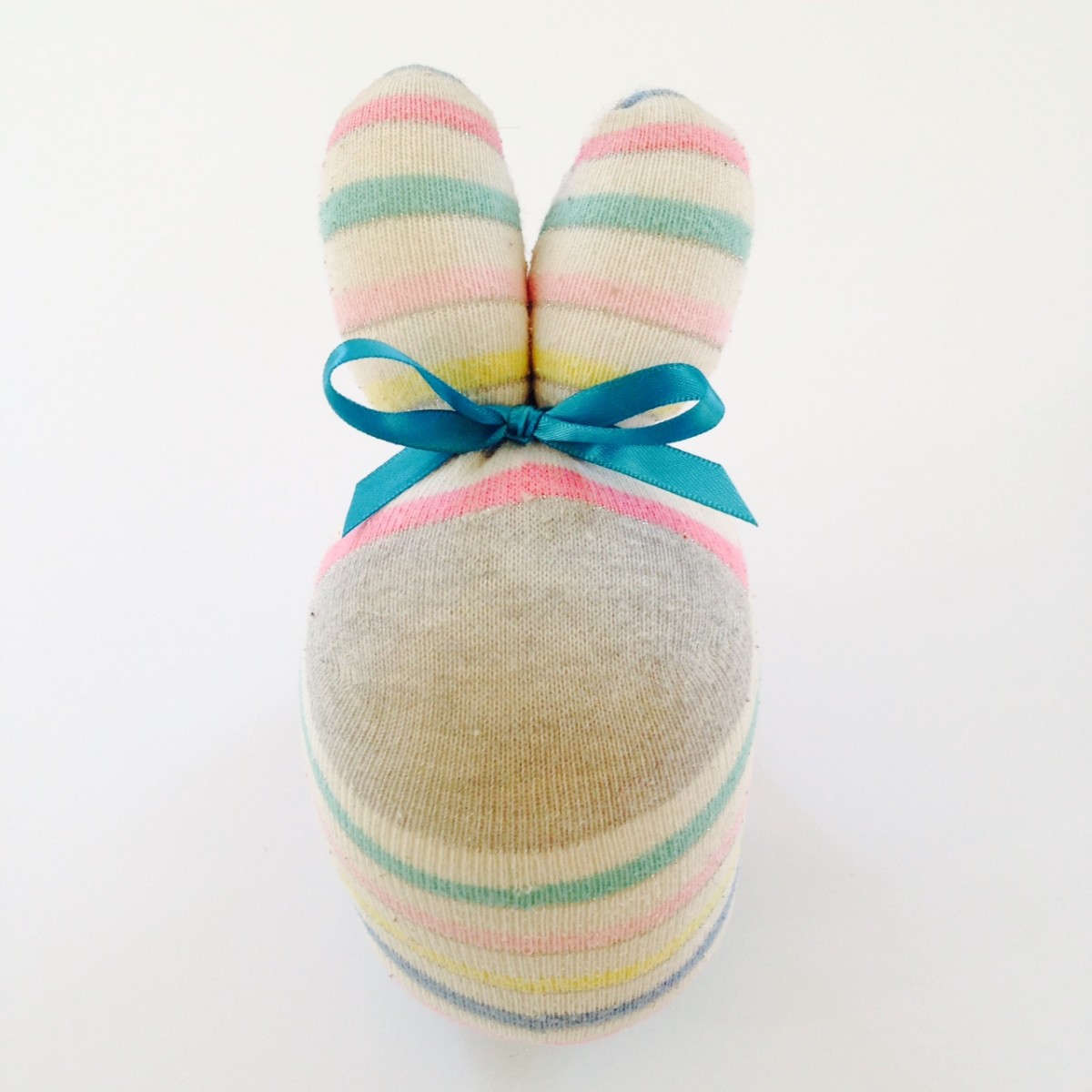 Then all you have to do is get creative with a face. I did simple crosses for eyes and a V shaped mouth with dark cotton, but you could try different expressions or use buttons. 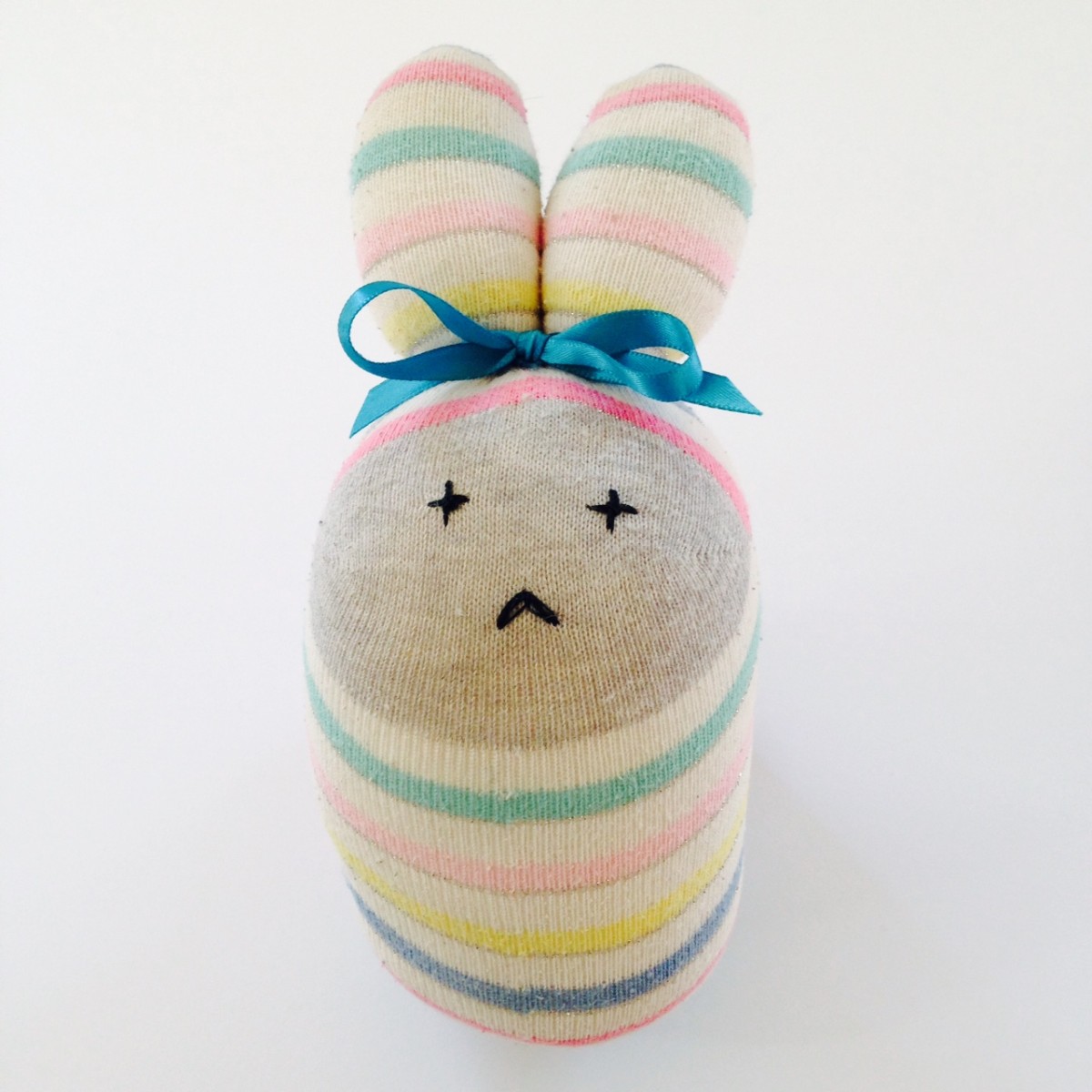 And there you go! Cheap life assurance and a cute, home made toy.

Cue Sock Bunny lying back on the sofa, safe in the knowledge that he has saved money. 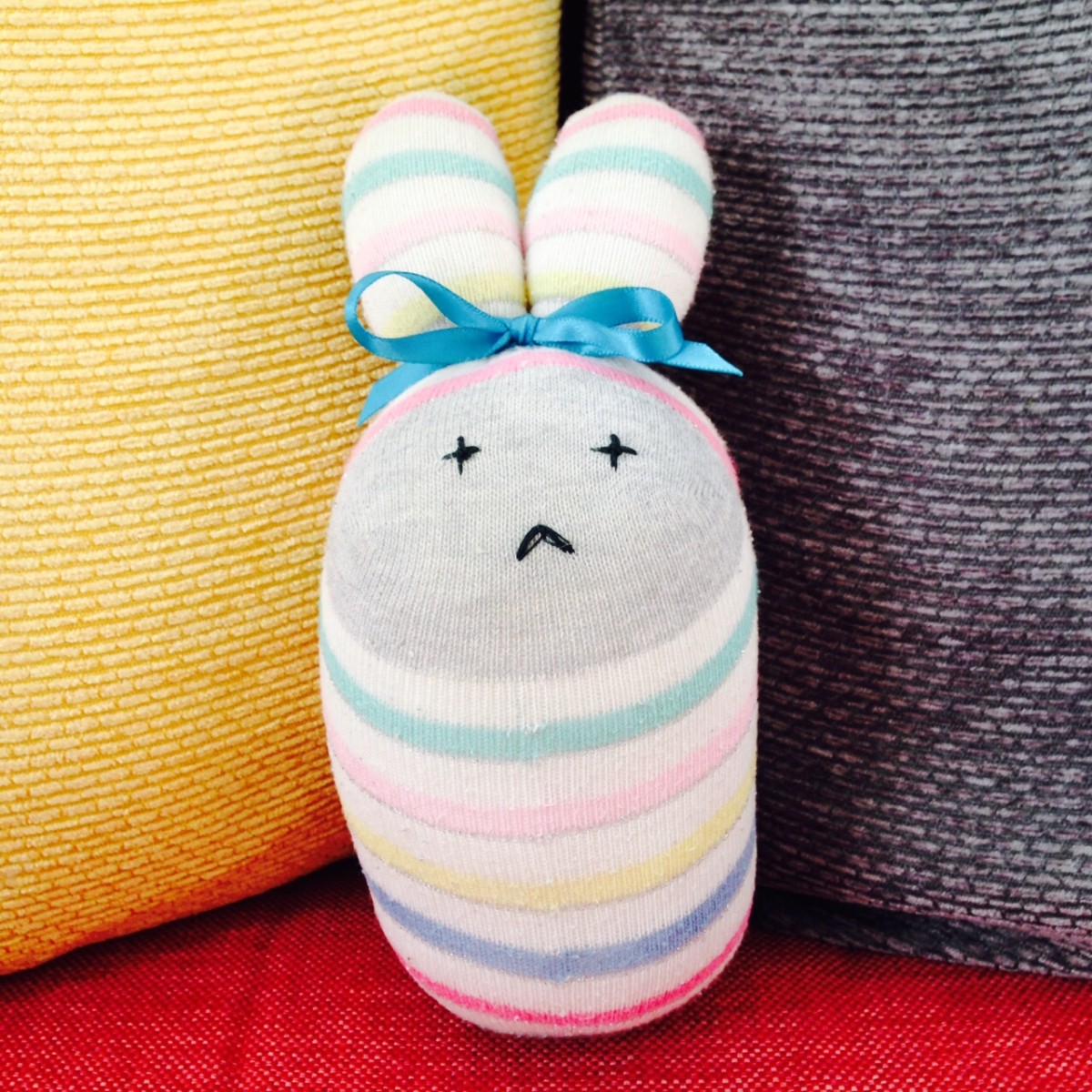