Last week I went to some of my favourite nearby gardens, where they also happen to have some chickens. After some searching online, I think they are Golden Sebright chickens, one of the oldest British bantam breeds. Apparently, they were the first poultry breed to have its own specialist club for enthusiasts, and are a largely ornamental chicken. They lay tiny white eggs and are too small to be kept for meat.

I have a lot of respect for a largely ornamental chicken. It’s kind of sassy to say ‘you know, I’m not much use for anything other than being pretty, but keep me anyway.’ 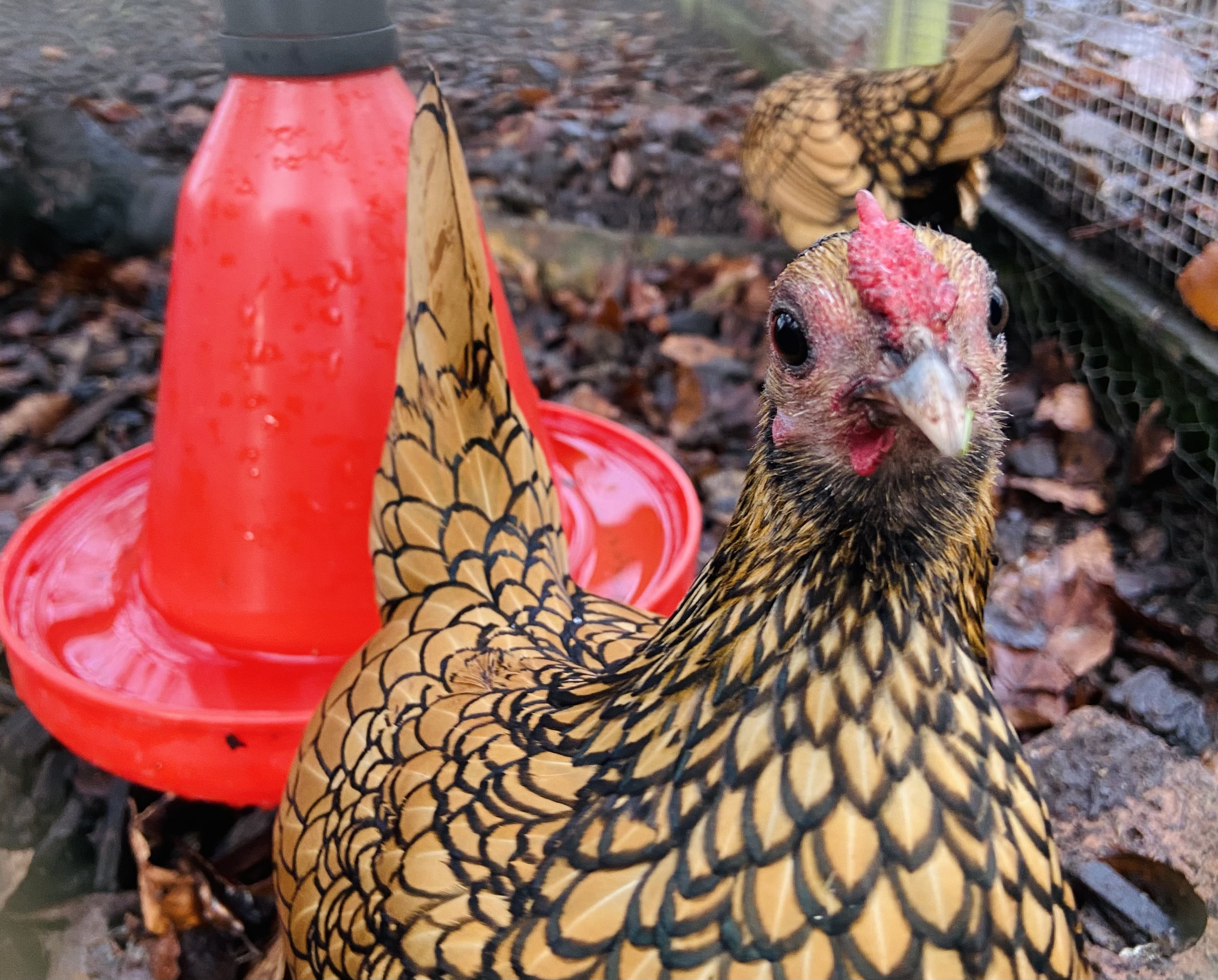 And to be fair to them, they ARE beautiful. I hung out with them for a little while, and they were full of personality.

If I didn’t have three cats and an excitable dog, I could see myself as a backyard chicken kind of a woman. I would go out and sit with them and let them climb into my jumper for a hug and we’d probably chat about our hopes and dreams and boys.

In this post though I want to talk to you about an issue that is impacting backyard bird owners throughout the UK. It’s not ‘which jumper is best to cuddle your chickens in’ – it’s bird flu.

What is bird flu and why do we need to know about it?

Avian influenza, more typically called bird flu, is a disease affecting birds in the poultry industry, backyard birds and wild birds alike. It’s normally a winter disease, peaking between December and February, but in 2022, for the first time ever, there were cases found in wild birds during the summer.

Although there is a very low human health risk associated with bird flu, it can be very harmful to bird populations as well as natural biodiversity more generally. We’re currently experiencing the biggest outbreak of bird flu that we’ve ever seen in the UK and it’s vital that all bird owners understand what they need to do to protect both their own birds and the wider bird population, no matter how few birds they keep.

It’s definitely not all doom and gloom though, and as a bird owner there’s plenty of guidance available to help you. To help keep bird flu under control, a UK-wide Avian Influenza Prevention Zone (AIPZ) was introduced in October 2022. The AIPZ made it a legal requirement for all bird owners to follow some simple rules around biosecurity, including:

You can find full details of all the required biosecurity measures on the Government website.

Bird housing measures were also introduced in England in November, followed by Wales in December. The Government website has some good information about how to house your birds safely and look after their welfare while they’re contained. 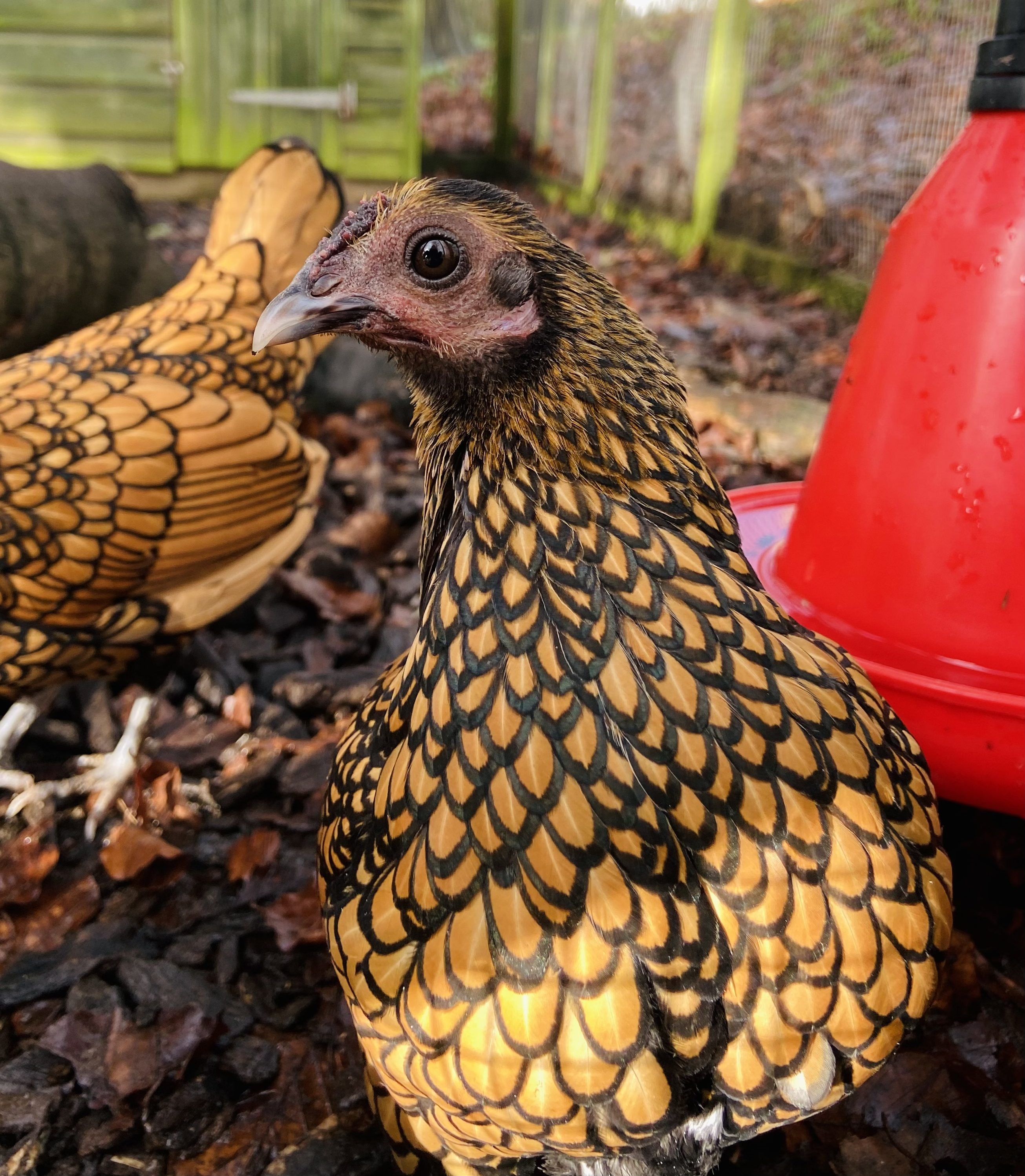 What does bird flu mean for backyard bird owners?

It’s all very well me popping along to visit some local chickens, but what does bird flu mean on a practical and financial level for backyard bird owners? I spoke to a couple of friends who keep chickens and ducks to get an idea of what bird flu and bird flu restrictions have meant for them.

Rebecca has kept chickens for the last eight years and ducks for the last six. ‘All our chickens are ex-battery hens,’ explains Rebecca, ‘who we offer homes to via Fresh Start For Hens and the British Hen Welfare Society. When we first started keeping chickens we had no issues with Avian Flu, but we were aware of it from the research we did prior to embarking on having our own backyard flock. Initially, our girls free-ranged a lot but had a coop and run if we weren’t around for several hours.’

Lucinda and her family started with four chickens in their garden, seven years ago. ‘We loved having them roam around the garden,’ says Lucinda, ‘watching them interact with the dogs and cats and retrieving them from elderly neighbour’s garden!’ 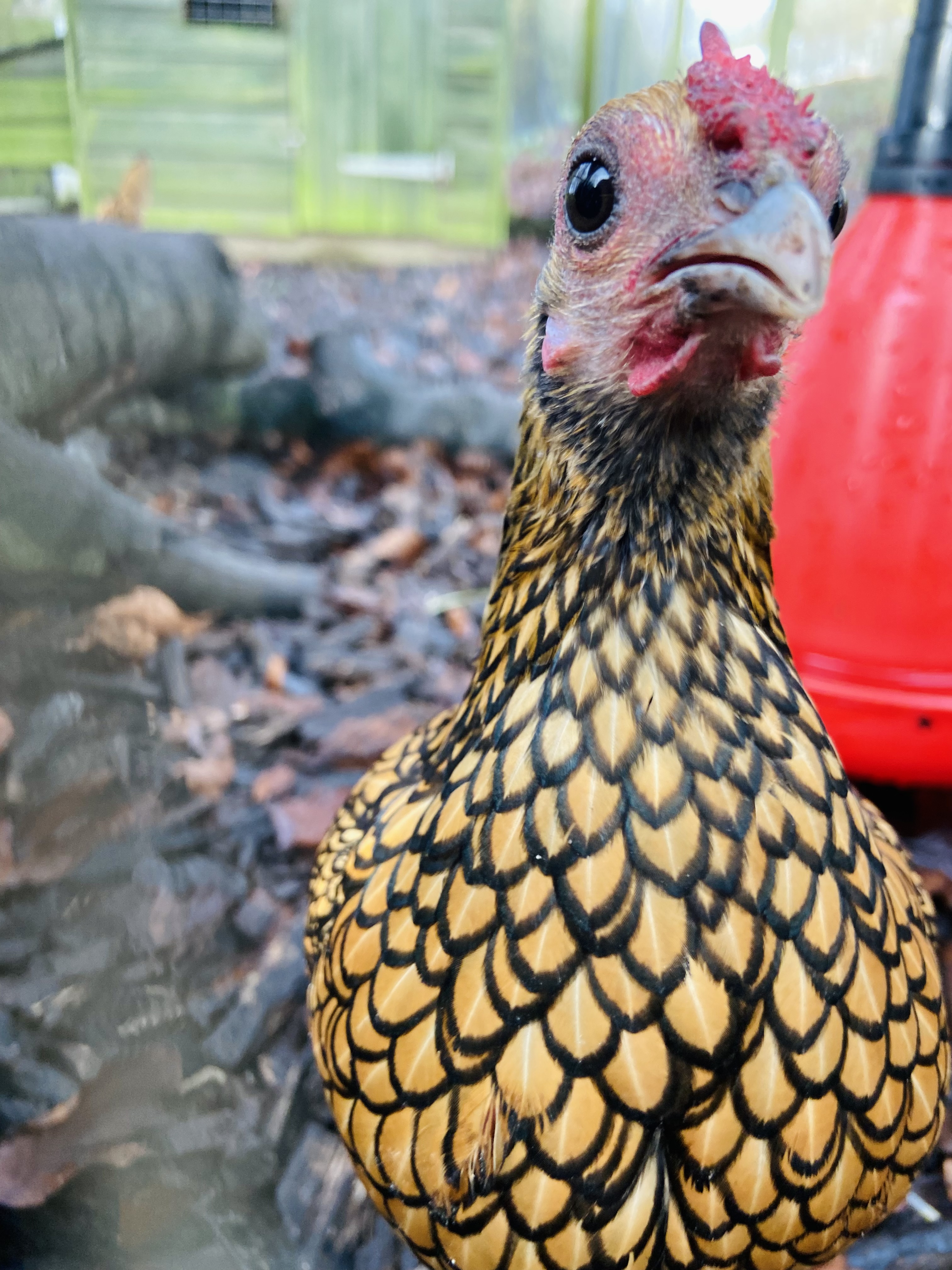 While at first the bird flu restrictions might feel a bit daunting, the principles are fairly common sense and you don’t have to spend a fortune. For many, it’s been a time to get creative.

‘As we don’t have the option to keep our chickens indoors in a barn,’ says Lucinda, ‘we have covered the run in a plastic shower curtain! It allows them to run out without interacting with the wildlife. It does prevent them from getting much-needed sunshine, so we try and give them vitamin D in their water.’

‘When avian flu became more prevalent we were required to keep our flock under cover and contained,’ says Rebecca. ‘We built a substantial-sized run that was enclosed and then bought a large tarpaulin to cover it to prevent wild bird droppings from entering the enclosure. If I remember rightly ours was £200.’

As well as the costs of making additions or adaptations to housing, bird boredom is a big concern. Signs of boredom can include feather loss, pecking and weight loss, and without gardens to roam in, birds can quickly find themselves struggling. Aside from me visiting them and entertaining them by taking photos of them, (thank you to my new Sebright friends), how do you keep birds happy and stimulated without breaking the bank?

‘Our birds are in a smallish run compared to the freedom of the garden,’ says Lucinda, ‘so we had to invest in some boredom busters like swings, mirrors and perches. While some of these have been expensive, we’ve come up with some cheaper ways to keep them entertained too, like hanging up a head of broccoli for them to reach and adding homemade perches made from the ends of logs or solid sticks.’

‘I’m in west Wales,’ says Rebecca, ‘and we’ve been in lockdown for avian flu since 2nd December. We have a swing, perches and an old tyre full of sand for dust bathing in the enclosure and their coops. We have a small pond that we refill a couple of times a week for the ducks and we give our girls fresh greens, mealworms and other treats to help with boredom too.’

‘In terms of keeping up with bird flu, I’m a bona fida geek,’ says Pippa, mum to three hens. ‘I read national geographic, did science A-levels and I now teach horticulture. I signed up for the DEFRA notifications last year when biosecurity measures came in. Luckily this means regular emails – it was daily in late summer and early autumn last year, so we could see what was coming.’

If you’d like to follow Pippa’s example and easily keep up with the latest news and advice, there are plenty of things you can do:

‘I’m sure the girls miss getting out in the garden and I can’t wait for them to eat the slugs and snails come spring,’ says Pippa, ‘but we reassure ourselves that it’s a better life than they enjoyed when they were battery hens. Within their cage there is a large log for them to play on, a pittosporum shrub they can play around, a ball on a string and various feeders and water troughs. We figure they’re not too unhappy – in summer we get three eggs most days and even now in the depths of winter we get 1 or 2 a day.’

If everyone does their bit to get bird flu under control then hopefully chickens and ducks in gardens across the UK can soon get back to exploring and enjoying the sunshine. As Lucinda told me, ‘there’s no match for long lazy days scratching in the flower beds or investigating next door’s greenhouse!’ 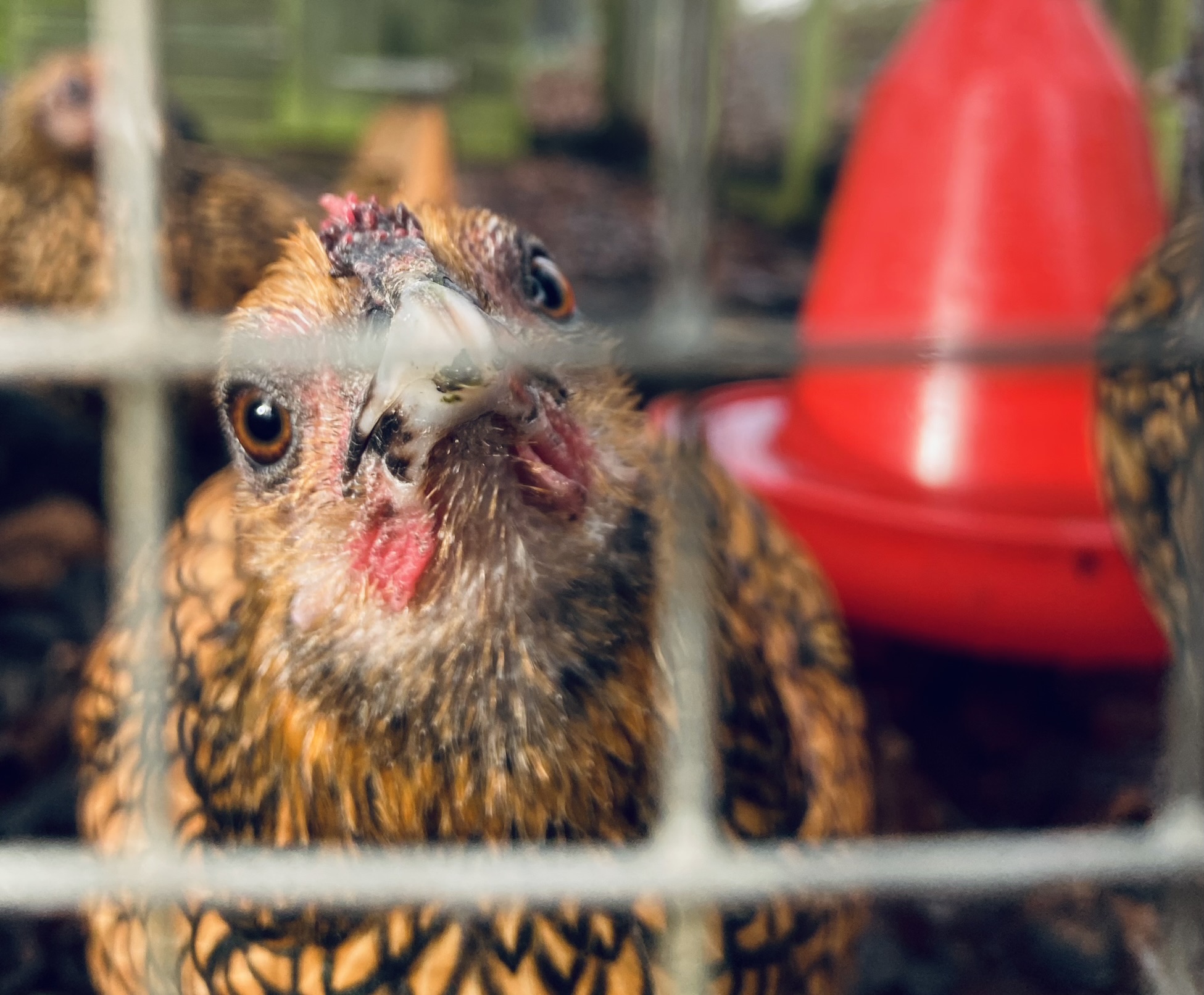