This week Bee and I came up to London for a couple of days for her to have gamma knife treatment. A gamma knife sounds like a pretty scary thing, although weirdly it doesn’t actually involve knives. We decided to say we were going for a relaxing spa break anyway, just to take the edge of.

The gamma (not) knives were to treat Bee’s AVM, which is a tangle of blood vessels in her brain which was discovered accidentally when she had an MRI for something unrelated.

I thought this post was going to be all about how worried I was, and how you never stop being a Mummy even though your child is grown up, and all of that sort of stuff.

And then I realised, sat in the waiting room while Bee had a metal frame screwed into her head, how selfish that sounded.

‘Woe is me, having to sit in this big comfy leather chair while my daughter undergoes complex brain treatment! Poor me having to worry about her!’

The primary emotion to come out of the whole experience was actually pride. As I sat in that comfy chair I could hear Bee having the frame fitted and I could hear her afterwards chatting to the staff. The woman who had gone in before her had come out in the wheelchair, crying and saying she couldn’t walk, so fair to say I was nervous on Bee’s behalf.

Until I heard her little voice from next door.

‘Yeah, it feels a bit like when I had my braces fitted.’

I felt a swell of pride and love in my chest and nearly had a little cry. (There WAS a box of tissues in my little wairing room so it would have probably been okay.)

She was just so calm and brave and I was so proud. 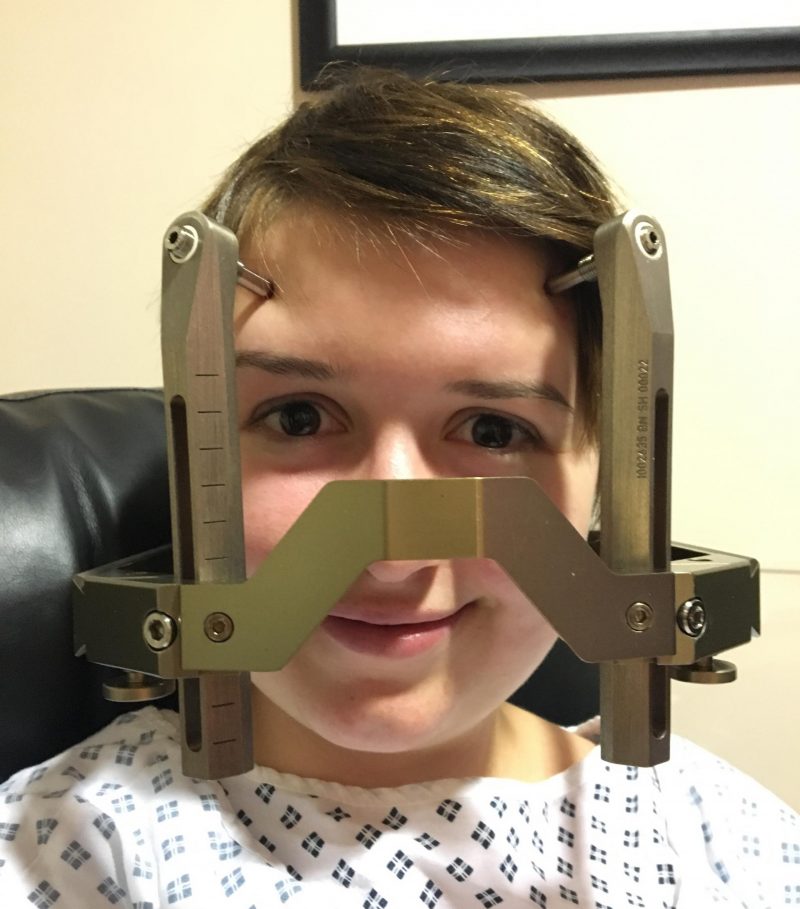 Of course being Bee, beneath the calm exterior she was quietly coming to terms with her own death, but you would never have known. Bee has written her own account here, so please do go and read it because it made me cry all over again.

As it turned out I had even more reason to be proud coming up. Bee had come back from having an MRI and an angiogram, ahead of the treatment itself, and we were waiting for them to get the laser all loaded up and aimed.

The doctor came in, along with FOUR other members of staff.

‘We found something a little unusual,’ said the doctor, which I felt was a rather cruel way to begin – it wasn’t exactly the X Factor. I was worried that they’d discovered a pair of old scissors or something in her brain.

‘Since we did the last angiogram it turns out that the AVM had started to heal itself.’

‘So we don’t think we need to do the treatment after all.’

Well. I knew Bee was special, but I never imagined she could miraculously cure her own brain.

So there we go. That’s what story of when Bee didn’t need have her brain radiated.