“I’m pretty sure we’ve been to Longleat before,’ I said to fiancé, “but I’m not sure when. I know it was rainy though.”

Except I can actually tell you exactly when it was – it was the May half term in 2012. This, my friends, is the beauty of blogging. You can just Google your own life, and tada! Here is the post, should you want to see proof. My (weirdly small in the original post) photos show the effects of the rain quite clearly – we basically saw a lot of animals huddled under damp logs. There are a couple of monkeys in this picture, I promise: 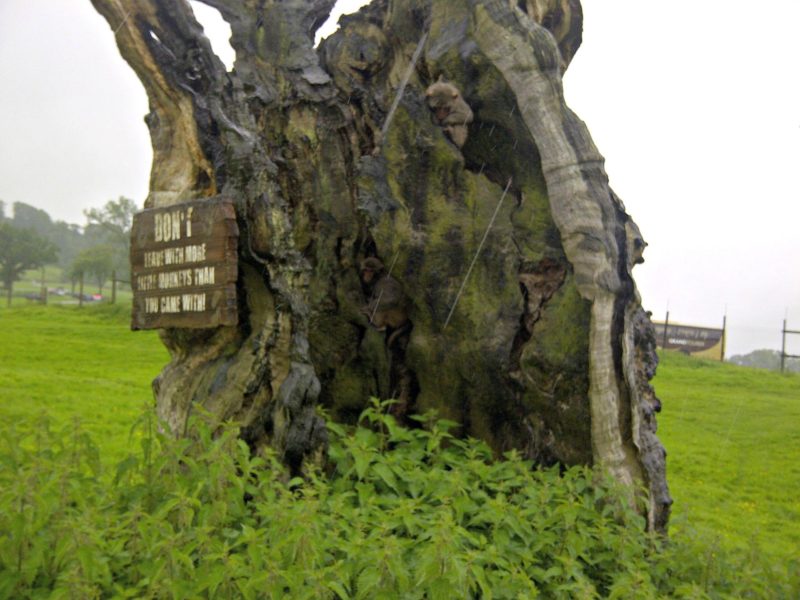 Second time around then, and I had high hopes for a slightly better safari experience. We had been invited to visit this time as Longleat is celebrating its 50th birthday, and there is a lot of cool stuff going on over the summer, like the pride of Longleat parade every day at 6pm in the main square.

We went on the Sunday of the bank holiday weekend, which is obviously asking for trouble, as we all know that bank holidays in the UK are unreliable weather wise. We opted to do the safari second this time, as Longleat suggested that it’s quieter in the afternoons, and there turned out to be pros and cons to this. The con was that it absolutely POURED with rain while we were doing the outdoors stuff. I mean properly poured. I like a maze as much as the next person, but it’s really not as fun when you are splashing through puddles in flip flops and the rain is soaking through your trousers. We did manage to try out quite a few of the attractions, and we really enjoyed the penguins, but ultimately we had to admit defeat and head back to the car.

What followed is probably not something you need to think about for too long, as it involved me peeling my sodden trousers away from my cold, wobbly legs, and trying to get into the car and under a blanket without anyone in the car park seeing. Ditto Belle. Classy. 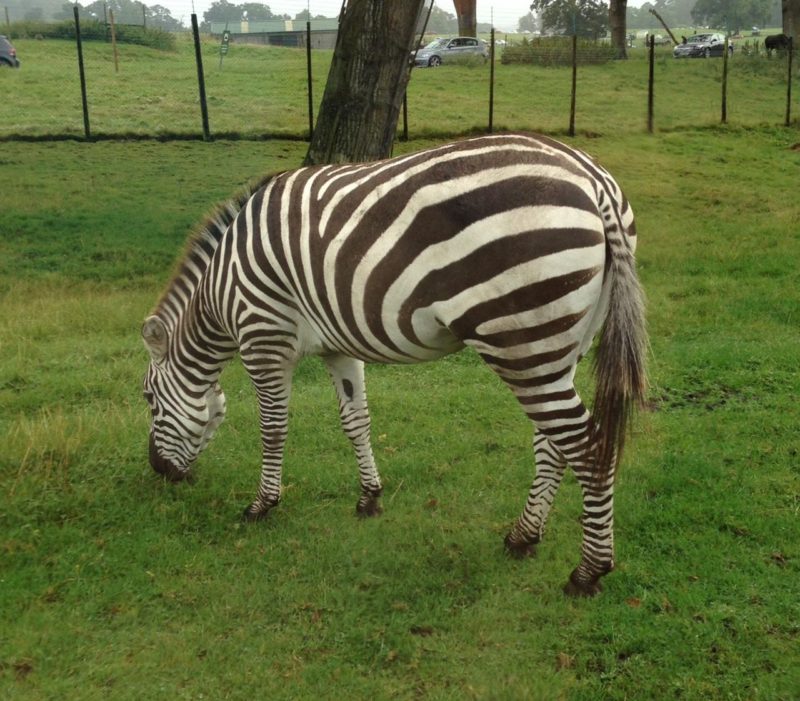 Zebra to distract you

So there we were, back in the car, in our pants, ready for the safari. This is where the pro bit comes in. Because we had opted to safari second, the rain had actually started to clear up, and the animals were obviously fed up of it being wet for so long, and had come out to play. The ‘Monkey Drive Thru’ was a completely different experience from our last visit, and at one point I thought fiancé might actually have some kind of seizure he was laughing so hard. At the very least I expected him to have to change out of wet shorts, but he held it together. He did declare it the funniest thing in his entire life though. 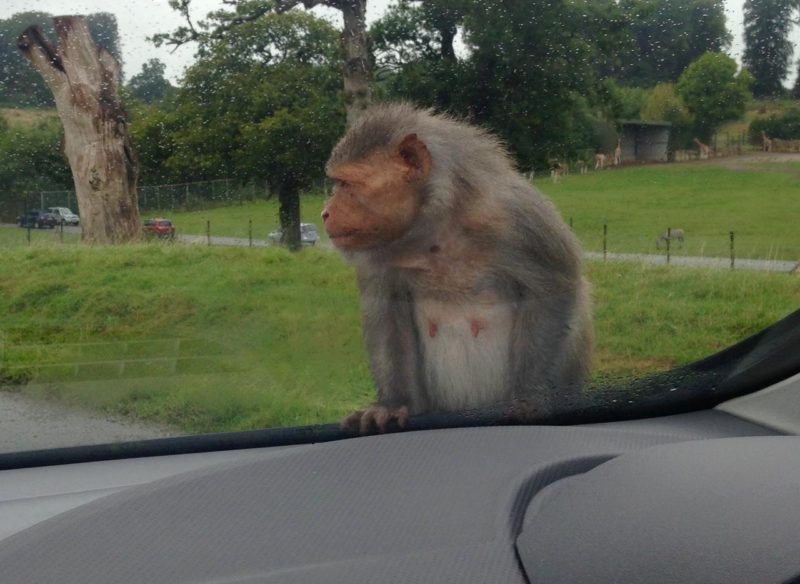 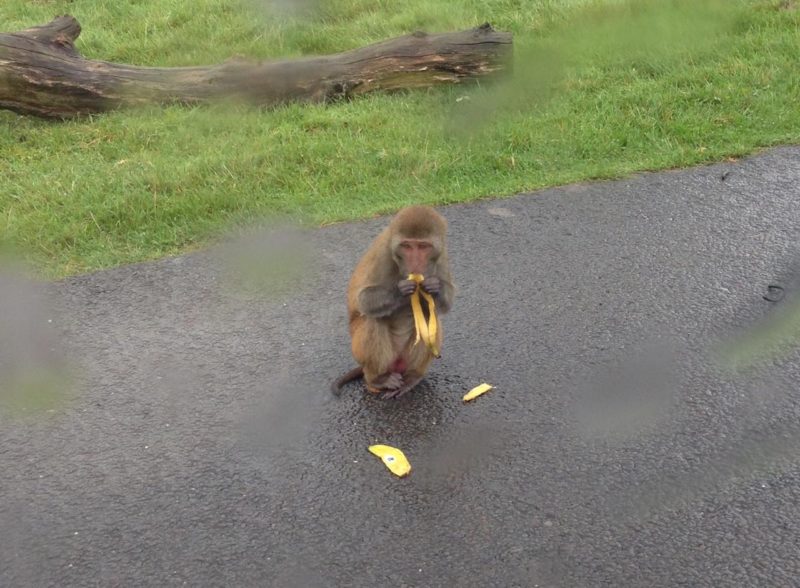 A monkey eating an actual banana!

He was a little less amused by the prospect of driving through the big cats, especially as our driver’s window is broken, and has to be propped up with wedges of cardboard.

“They are behind wires though right?”

“But seriously, they are?” 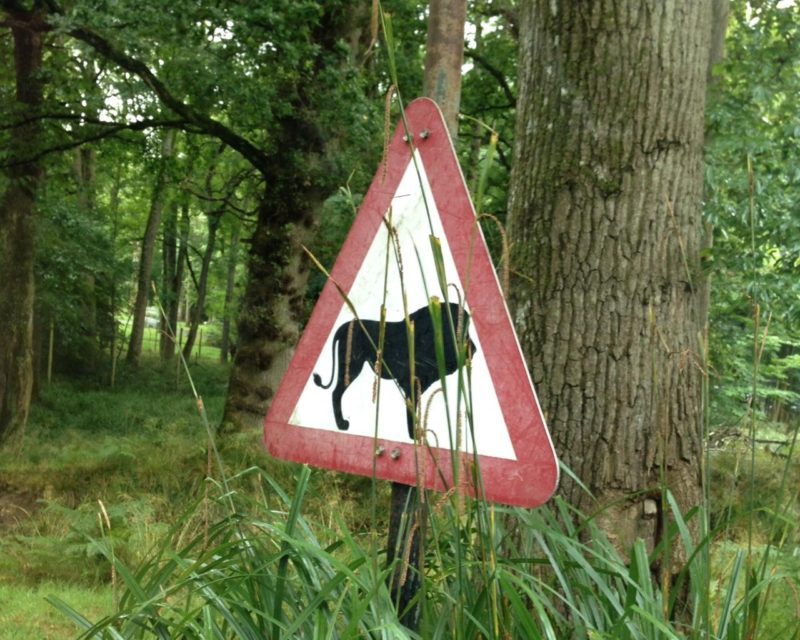 It’s a weird feeling driving through an enclosure of big cats. You’re tense and excited, because you’re trying to spot one, and then up ahead you notice all the cars have stopped, and you know why, but you still can’t quite see a lion, and then suddenly there they are, right THERE, with only a precariously wedged window between you and actually being able to touch them/get your hand bitten off. 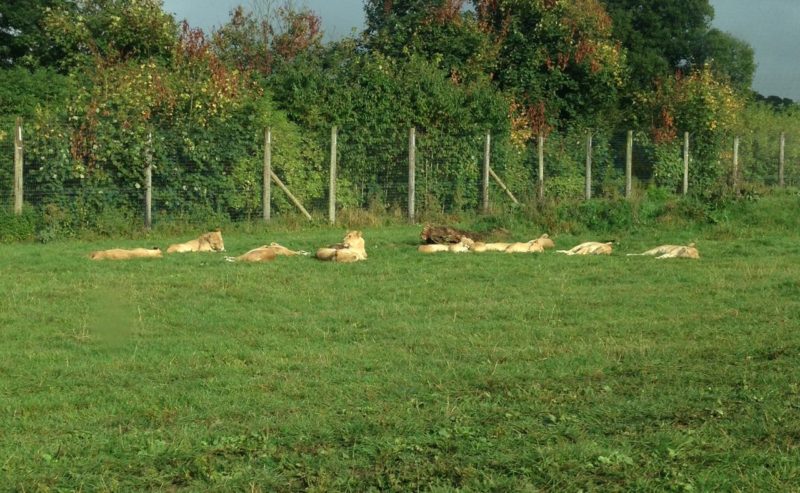 The safari bit lasted much longer than the first time, as the animals weren’t all hidden away, and we were a good couple of hours driving through, warm under our blankets. I say blankets, we actually only had one, which I hogged. I made Belle make do with her cardigan and a thin scarf, but she’s young and hardy, she was fine.

Aside from getting a little on the wet side initially, we really enjoyed our trip to Longleat. We’d definitely go back, and who knows, third time lucky with the weather maybe?

We were invited as guests for the purposes of this review.