Following on from our review a few weeks ago of the Smart Car, this month we’ve gone to the opposite end of the spectrum, by reviewing a BMW 2 Series Gran Tourer. My fiancé is going to be giving you his boy’s eye view too, but in the meantime, I’m going to tell you how it’s been settling in from my point of view.

So, to start with, it’s white.

It is though, that’s not made up. Here it is, getting to know our existing car, in the style of two dogs meeting for the first time: 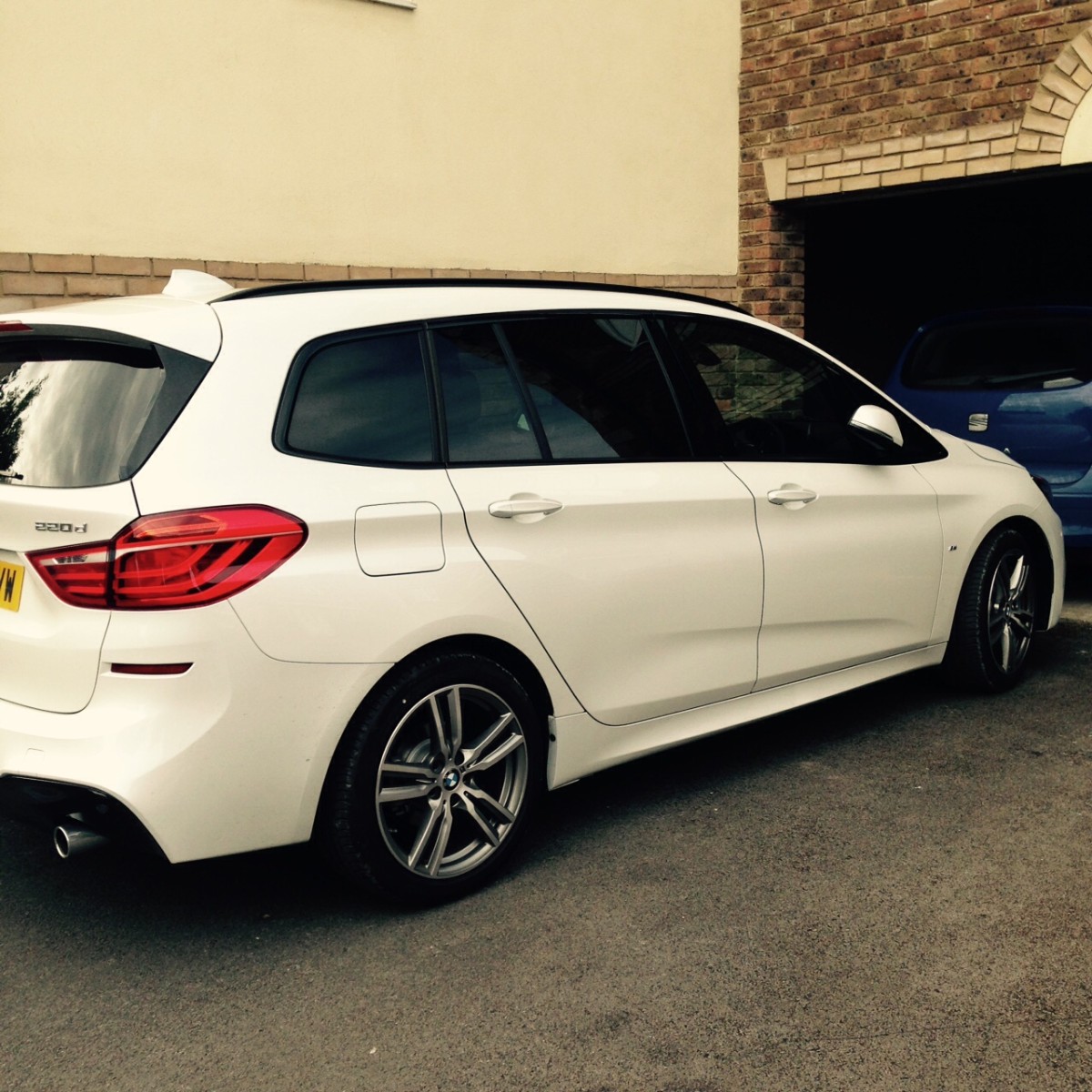 There were a couple of things that initially struck me about the BMW 2 Series Gran Tourer. The first is the size.

The 2 Series’s boot is massive, and it has already proved itself several times over, including carrying over 20 music stands to a Southern Sinfonia concert at Wells Cathedral, transporting Belle and all of her camping equipment to her week at Camp Wilderness, and taking all four of us, plus belongings, to Standon Calling festival. 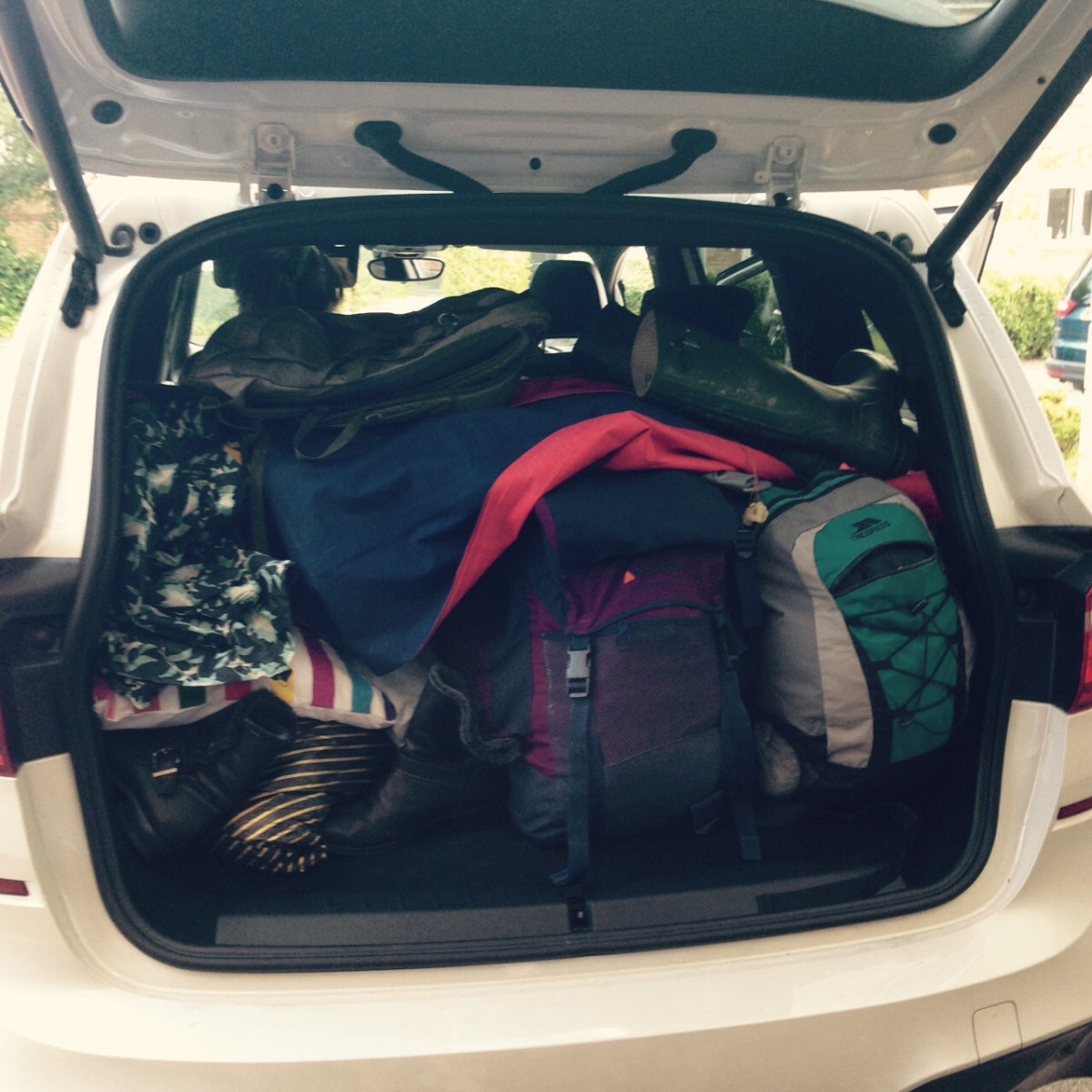 If we had a bigger family, but less crap to pile into the back, the BMW 2 Series Gran Tourer also converts into a 7 seater, with two additional seats that pop up in the back. All of the seats are incredibly versatile – I don’t think I’ve ever been in a car that has so many different positions for any one seat.

The other big thing about the BMW 2 Series Gran Tourer is its gadgets.

In the manual, it describes the driver’s seat as the cockpit, which gives you an idea of the complexity of some of the controls! If you’re a driver who likes tech, though, or harbours secret fantasies of being the next James Bond, then this is definitely the car for you. One feature I’ve not seen in any other car is the little screen that pops up – the head-up Display – with information that only the driver can see. It gives you the basics, like speed and simple directions, so you’re not distracted looking all over the place.

The main display screen is much larger and everyone in the car can see it. It’s great for music, especially Spotify, and does all the things you’d expect from a top of the range car like the BMW 2 Series Gran Tourer, with stuff like parking controls, Bluetooth, rain sensors and DAB radio as standard. 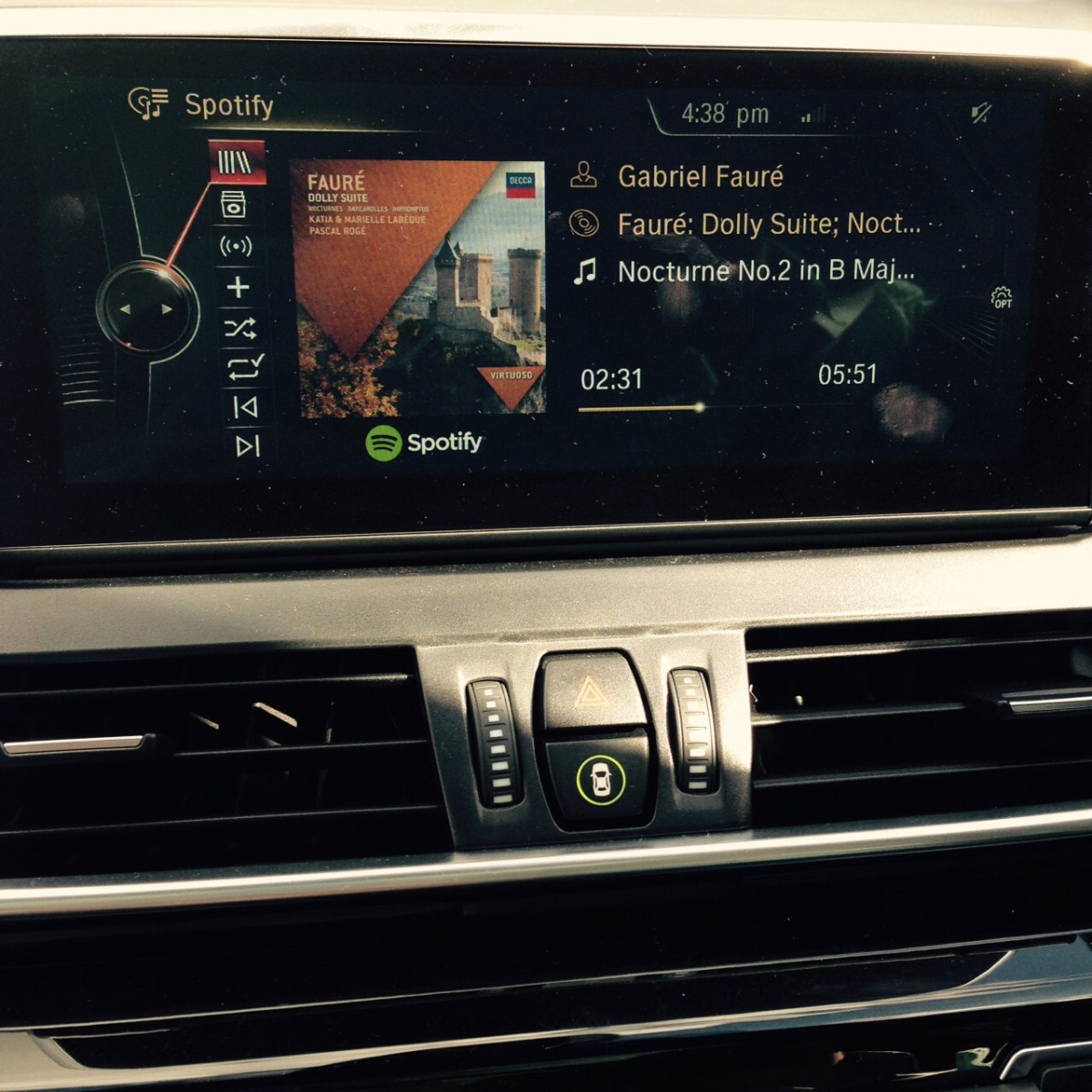 The Sat Nav was great, and really accurate too. (We did accidentally nearly go to High Wycombe earlier this week, but that was human error!)

The zoom out feature on the sat nav made me chuckle every time:

Belle’s favourite things about the BMW 2 Series Gran Tourer were, as I expected, the things we’ve never had in a car before, like the huge sun roof and the heated seats. She also liked doing dances in the rear camera and appearing on the screen for us to watch. (Make sure you know if your child is going to do this and that you don’t just reverse over them.)

I really liked the Emergency Call feature, and think this would be hugely reassuring, especially for lone drivers or for families. I was a little disappointed when the BMW delivery person explained that it wasn’t the button for the ejector seat, but it’s great to know that you wouldn’t be dependent on phone signal, or even being able to use the phone, in case of an emergency.

There are so many cool features on the BMW 2 Series Gran Tourer that I suspect you could have the car for years without even realising all of them were there! Some of them we discovered accidentally, like the automatic unlocking when you’re nearby with the key and try to open the door. Belle and I panicked at first that we’d forgotten to lock it when we were in Sainsbury’s, but after some experimentation, we discovered that it’s actually a design feature, so you don’t have to rummage in your bag for your keys to get in the car. Because it has a start button, you don’t even need the key in your hand to start it!

After reading up on the contactless features, I discovered that the boot can operate in a similar way. As long as the key is on your person somewhere, you can open the boot just by waving your foot under the rear bumper. This is genius for those times when you have your hands full of shopping bags and are having a bit of a moment where you really just need to get the stuff in the boot, eat a Tracker bar, and get home.

All in all, we’ve had good fun getting to know the BMW 2 Series Gran Tourer, and enjoying the space, versatility and performance. Check back to find out what my fiancé thought of it next week.

We were lent the BMW 2 Series Gran Tourer for three weeks for the purposes of this review. All opinions are my own.