If I had to think quickly about one moment in my life that had changed its course for ever, it would be tempting to focus straight away on the whole ‘pregnant at 16’ thing.

Yeah, I know, having a baby at 17 in the middle of your A-levels is a pretty big deal, (insert subtle link to teenage birth story here), but what about the smaller events, the ones you don’t thing of as being important at the time? I found a photo recently that made me think about one seemingly small decision that ended up having a huge impact on my life.

Belle was just a few weeks old, (I was 24 this time around, still fairly young), and things weren’t going altogether as well as I had hoped. Bee had been a ‘good’ baby in the ‘sleep through the night, be held by anybody’ sense and of course at the time I had smugly put it down to my ‘relaxed parenting style’. Oh how everyone must have laughed when Belle came along.

Belle was more of the ‘I’d actually prefer to be held just by my Mummy ALL OF THE TIME please, ideally with one of her boobs in my mouth’ school of thought. She also liked to wake up fairly regularly during the night, just to check I was still paying attention. Every half hour or so normally, just for the first few years.

One morning, wide-eyed with exhaustion and in desperate need of some adult company, I came upon the church in the centre of Taunton, where I lived at the time. On the noticeboard outside was a poster advertising a weekly breastfeeding group, happening that morning. I wasn’t an especially passionate mother either way when it came to feeding, and felt nervous about meeting new people, but the thought of a free biscuit and a cup of tea that I hadn’t had to make was a tempting one. I told myself to man up, left Belle’s buggy with the collection of others at the foot of the stairs and made my way into the upstairs room.

I was met by a group of equally shell-shocked looking women, each staring helplessly at their babies whilst comparing notes.

“Does yours do that thing where they pretend to be asleep and then scream the minute you try to put them down?”

I was scared at first, and I have to admit, slightly horrified. I remember that first session, chatting to a woman feeding her ten month old daughter, and her baby just looking so big – I couldn’t imagine breastfeeding what to me looked basically like a small teenager. That group of women though went on to become one of the closest groups of friends I have ever had and even now, 11 years (two and a half of which I was breastfeeding for) and several house moves later, we are in the midst of making plans for our Christmas night out.

This is the photo. I look young and thin and brown and Belle looks terrified that at any moment I might put her on the floor with the other babies and lose physical contact. 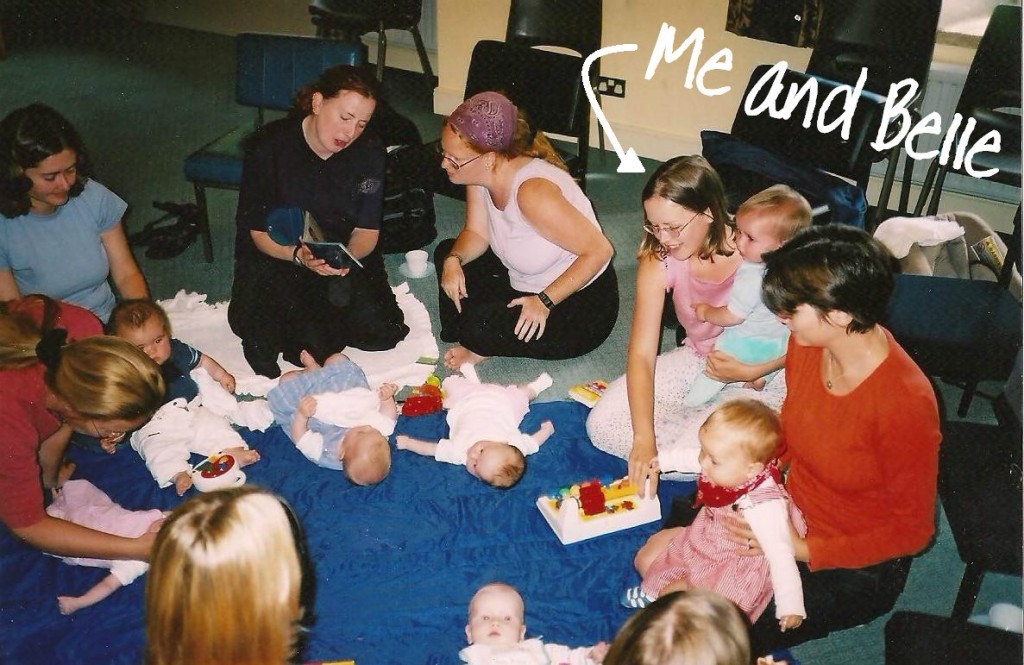 That group changed my life in other ways too. It was through the gentle persuasion of the group leader that I trained to be a breastfeeding counsellor with the Association of Breastfeeding Mothers and served on the committee for many years as the charity’s treasurer, getting my first taste of charity management and fundraising. It was through the ABM too that I wrote my first article for The Green Parent magazine – a new magazine at the time, looking for volunteers. I went on to write for over 40 issues and still have every one of them, including a photocopy of the cheque from the very first time I was ever paid to write.

Paid to write! Can you believe it? At the time it was such a thrill, unbelievable almost that someone would actually pay me to do something so enjoyable. It was my experiences with The Green Parent that fuelled my passion for writing and eventually led to me becoming self-employed. I still find it incredible sometimes that I can make a living from something that feels so natural and fun.

That moment of hesitation outside the church could have gone either way, but if I hadn’t swallowed my fears that day and taken the plunge who knows where I might be now.